Celebrating with ‘our’ school 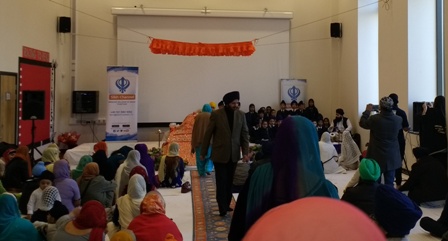 Children singing in the school hall alongside the holy Guru Granth Sahib.

Members of Leicester Novus Rotary Club were invited to a double celebration at Falcons Primary School, Gipsy Lane, Leicester, which many of us think of as ‘our school’.

Its headteacher, Mrs Jasbir Mann, is a past president of the club and the club held its eighth birthday party at the school. For nearly a year the Rotary Club has been working to provide a Peace Garden featuring landscaping, planting, and a water feature in its grounds which used to be the Towers Hospital site.The aim is that the garden will be a place for quiet reflection.

The school’s double celebration was of its third anniversary and the anniversary of the birth of Guru Nanak, the founder of Sikhism, whose teachings the school follows.

Children sang, there were recitals from the faith’s holy book, the Guru Granth Sahib, and there was the customary Guru ka Langar with pupils, teachers, parents and guests sitting crosslegged on the floor while enjoying delicious refreshments.

The Rotary Club’s president-elect Jason Chauhan took time out from a family celebration and took his father and uncle to see the school and its Rotary Peace Garden.

The next ‘working party’ in the garden will be held on Wednesday, November 8. In December trees will be added to the scene and in the spring of 2018 a hedge around the site will be provided free of charge (except voluntary labour).

Jason said the club was very pleased to be working so closely with the school to provide a facility which will be a unique and attractive adornment to the school site.