When District Governor Chris Davies visited Leicester Novus Rotary, she did not deliver the ‘pep talk’ which many Rotary leaders do. Instead she asked the question: “Why are you here? Why are you in Rotary?”

When her question was greeted with silence, she said that is what she always got; what she had come to expect.

But after a while members opened up and there followed a wide-ranging group discussion of Rotary membership matters. 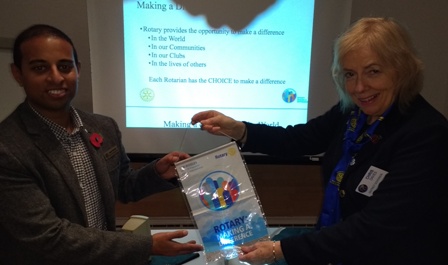 Chris said Novus is the ideal club, having almost equal numbers of men and women, having an average age well below the 74 average of other East Midlands clubs and having nine members from a South Asian background, nine ‘White’ members and one Black Briton.

She praised Novus for its many projects which she said are making a difference.

Chris presented to President Elect Jason Chauhan her newly-arrived banner bearing the slogan Making A Difference.. She said Novus was the first to see it.

Members agreed that it had been most interesting to be asked what motivated them and kept them coming to Rotary.