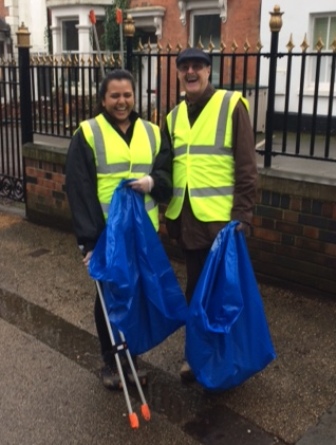 The nationwide Great British Spring Clean was held over the weekend of March 3-5 2017. In Leicester the effort was co-ordinated by the city council’s parks staff.

The department’s Penny Brown, with whom Leicester Novus had worked on the Walnut Street ‘pocket park’ clean-up and on the planting of End Polio Now crocus bulbs in Abbey Park, invited Leicester Novus to join in.

Using ‘branded’ plastic bags and litter-pick devices, Anoushka and Jim walked about one and a half miles from the Pavilion in Victoria Park, down New Walk and back via Regent Road and the war memorial collecting rubbish as they went.

More than 20 bags of rubbish were collected. In among the cigarette ends, bottles and food wrappers, Jim found a driving licence which was later handed to police.