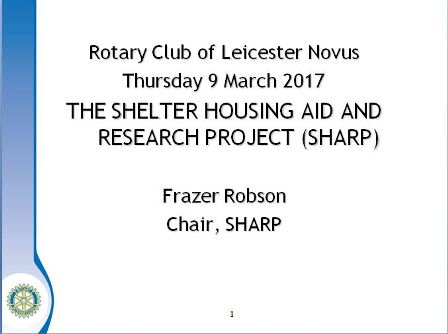 Frazer Robson’s opening slide for his PowerPoint presentation on SHARP

Four years ago, when he was Immediate Past President of Leicester Novus Rotary, Frazer Robson spoke about The Shelter Housing Aid and Research Project, of which he had been a trustee since the 1980s,

Frazer, who has chaired the charity for eight years, explained that it is independent of the national Shelter charity and that it works with many agencies to campaign for more affordable housing and works with individuals to help them get homes.

With six professional staff (three part-timers), the charity has helped thousands of people. More volunteers are needed by SHARP — and more financial help. At a recent meeting, members of Leicester Novus Rotary voted to donate more than £200 to charity.

On Thursday, April 20, the Rev Helen Hayes,chair of One Roof Leicester, which this winter organised Leicester Winter Night Shelter, the first scheme in Britain to use several different faith centres as temporary accommodation. To help either charity, please click on the links above. Or e-mail RotaryClubofLeicesterNovus@gmail.com to come and hear Helen or our other guest speakers.