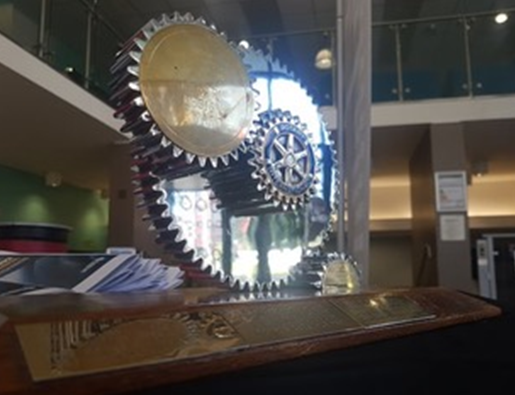 A canny invention for the motorsport world scooped the top prize in a Rotary competition for young designers.

A-level student Oliver Warner, sponsored by the Rotary Club of Leicester Novus, was named Young Designer of the Year at the competition organised by District 1070 Rotary Clubs and hosted by De Montfort University. He impressed judges with his idea for a maintenance lift to make it easier to service go-karts. 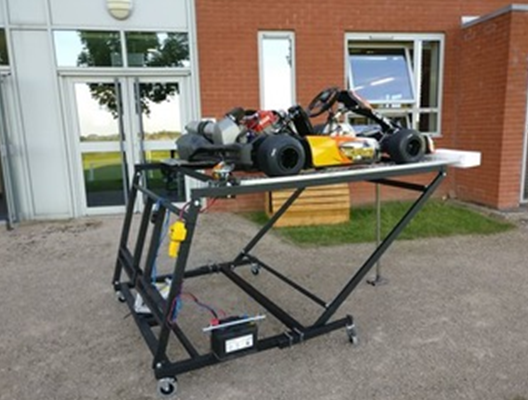 More than 40 students from schools across Leicestershire, Rutland, Lincolnshire and Northamptonshire took part in the challenge, which aims to inspire the next generation of designers.

Oliver, a pupil at Leicester Grammar School, was thrilled by his victory. “I still can’t believe that I’ve won the award as there were some excellent products on display,” he said. “I feel that there were many designers there who were equally deserving of the award.”

His lightbulb moment happened after a chat with the owner of a go-kart track in Sutton in the Elms, near Broughton Astley in Leicestershire. 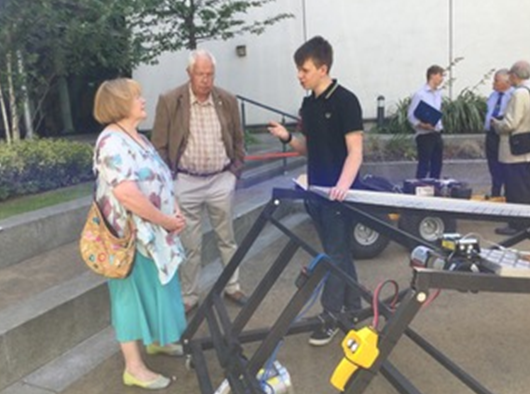 Oliver said: “He mentioned that in order to work on the corporate karts that are hired out to the general public,he needs four people to lift them onto a stand as they’re​ significantly heavier than a traditional race kart. He told me that because of this, he normally leaves the karts on the ground to work on them and this is not a very comfortable position to work in.

“I then set about designing a framework which would allow the karts to be lifted into an ergonomic position whilst only requiring one operator.

“I’m going to work with him to develop the idea further and to improve the functionality of the lift. And then we’ll see where it goes from there.”

After his A-levels are finished, Oliver hopes to land an apprenticeship with a motorsport team.

As well as his trophy, Oliver won an entrepreneurial support package from DMU, involving one-to-one sessions with the careers team, access to seminars and the chance to speak to students who have successfully developed creative businesses. 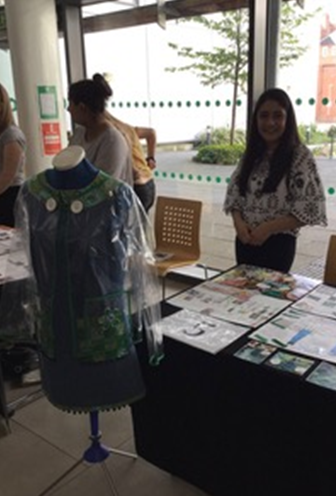 Evie and her jacket inspired by Mary Quant

GCSE student Evie Loyal, sponsored by the Rotary Club of Oadby Launde, won the most innovative textile design, for a funky dress and jacket with a retro feel.

Evie’s stylish entry was influenced by the work of a British fashion icon who was at the height of her creative powers four decades before the young Leicester designer was born. “The inspiration came from the 1960s fashion designer, Mary Quant,” said the Sir Jonathan North Community College student. “I used strong colours and bold prints to create my unique designs.

“I was surprised, but very proud when I received the award.”

The Young Designer Competition is a partnership between District 1070 Rotary Clubs,which stretch across the East Midlands, DMU, local schools and colleges.

Event co-ordinator Colin Derrick, of the Rotary Club of Leicester, said: “I felt a great sense of pride that once again, the combined efforts of De Montfort University and Rotary clubs across the East Midlands enabled such talented young designers an opportunity to showcase their work.

“The day was a triumph, a unique combination of ability, determination, and dexterity.”

President of Leicester Novus Rotary Gemma Kiddy said: “What a great achievement for a remarkable and polite young man. We were really pleased to be able to sponsor Oliver. His ideas, innovation and passion were clear throughout his design and our conversation. Young Designer is a unique and vitally important competition which gives opportunities for young entrepreneurs to find their platform and indeed for industry professionals to find them. We wish Oliver every success going forward and hope to see him in F1 teams in the coming years.”

The panel of judges included Helen Burbidge, senior lecturer in fashion and textiles at DMU, architect Peter Collier, senior partner at Pick Everard, and Hilary Painter, treasurer of the Rotary Club of Blaby.