Eight trees were planted in the Rotary Peace Garden being developed at Falcons Primary School, off Gipsy Lane, by the Rotary Club of Leicester Novus.

Led, once again, by Matthew Herbert, of the Wildlife Trust, and given invaluable help by Viren Shah. the school’s premises officer, Rotarians planted the trees near the solar-powered water fountain which will be at the heart of the Peace Garden — an area of quiet reflection for pupils, and staff.

The three silver birches, three Himalayan birches and two flowering cherry trees are about 10 feet tall and needed substantial holes to be dug in earth which was predominantly clay, with stones, tarmac and other hard-to-budge detritus. “Claggy” is an apt descriptor. The digging crew, aided by President Pradeep Popat, found they were several inches taller as a result of the mud sticking to the soles of their boots. 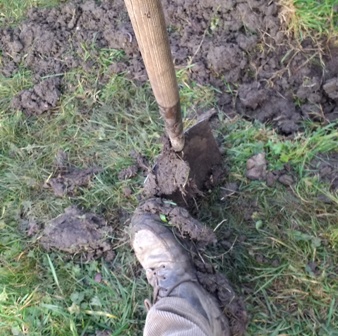 Claggy… the boot and spade of a tree-planter

The next stage of the gardening project will the planting of the remaining purple crocus bulbs marking Rotary International’s 32-year campaign to eradicate polio from the world. Purple is chosen because each of the millions of children to be given oral polio vaccine by volunteers in areas of the world where the dread disease is endemic have their fingers dipped in purple ink to show that they have received their dose.

With only a month of 2017 left, there have been only 11 new cases in Afghanistan and five new cases in Pakistan. When the campaign started, there were about 365,000 new cases diagnosed each year.

In the new year 150 trees will be planted in a hedge along the school’s boundary railings, exceeding the aspiration of Rotary International President Ian Riseley for a tree to be planted in 2016-2017 for each of the 1.2 million Rotarians in the world. The final piece of the jigsaw will be a 10-foot tall Peace Pole like a totem pole bearing the message: “May Peace Prevail Across The World” in several different languages.

The Rotary Club of Leicester Novus has 19 members whose ages range from 26 to about 70. They enjoy hands-on service projects like the Peace Garden, fundraising and dining together. If you want to know more, please e-mail RotaryClubofLeicesterNovus@gmail.com