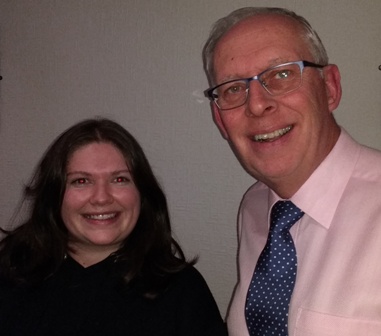 Immediate Past President of the Rotary Club of Leicester Paul Bonnett with Novus President Gemma Kiddy.

Immediate Past President Paul is continuing his work for the charity as an ambassador and he visited the Rotary Club of Leicester Novus on Thursday, February 16.

He explained that the charity leases three helicopters; one for Derbyshire, Leicestershire and Rutland, one for Warwickshire and Northamptonshire and one crewed by specialists in children’s medicine, and runs two night cars because it can often be quicker to use a car in the dark, making it more likely that lives will be saved.

On average, it costs £1,700 every time an ambulance is deployed. Recently, there were an average of six missions flown each day. The cost per year runs into millions of pounds, but Paul said that a donation as small as £5 can provide pressure dressings and £20 could buy replacements for the pads which can be used only once on the defibrillator machine carried in the vehicles.

Paul’s talk, though, was much more than just a recitation of facts and figures; he also told some real life stories of successful missions. He handed out leaflets in the hope that the Rotary Club of Leicester Novus would support the charity, which receives no Government funds.