A chat with the DG 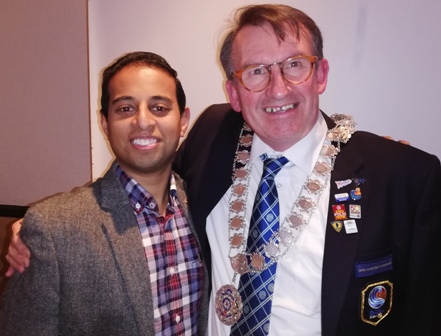 Although they have ideals in common and shared values, every Rotary member is unique. So it stands to reason that every Rotary Club is different. Inevitably, then, every District Governor is unique.

Each year brings a new governor charged with visiting every club in his or her district at least once. Some governors are formal, some are less so. Some are experts at using PowerPoint to communicate authoritatively.

Tim Tucker, this year’s leading Rotarian in the 89 clubs in the East Midlands has his own unique, endearing approach. When he visited Leicester Novus — which prides itself on its friendly, informal  approach to serving humanity — Tim sat in one of the chairs laid out in a circle and chatted, generously taking his turn in an unstructured conversation.

He reminisced on his years in Rotary, which started after he had been a member of Rotaract, a movement for people aged 18-30.  His many anecdotes illustrated how the disparate connections available through Rotary membership so often lead to friendships so vital to the ideal of public service.

After 90 minutes his fascinated audience thanked Ron Riding for driving Tim back to St Ives, Cambridgeshire, where Tim’s day had started before 6am.