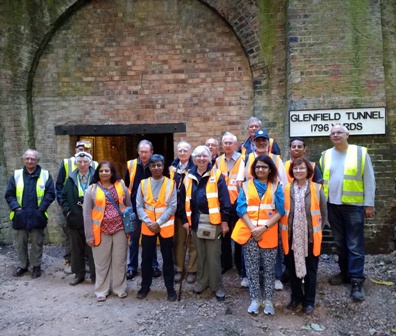 Guests and guides about to explore Glenfield Tunnel

Fourteen Novus Rotary members and guests explored Glenfield Tunnel which, when it opened in 1832, was the world’s longest steam railway tunnel.

The Rotarians did not walk all 1796 yards to the highlight of their trip. That was about 400 yards into the tunnel beneath one of the shafts up which rock and soil would have been lifted up after being dug by ‘navvies’

All the way there and back they were listening to an entertaining and informative talk by Chris Hossack, of the Leicestershire Industrial History Society. They learned that one of the deaths in the tunnel happened when one of the tunnel diggers fell to his death down one of the shafts. 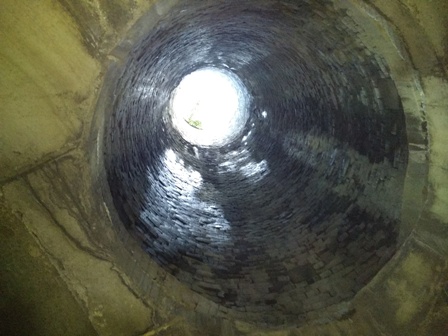 The tunnel took two years to dig. It was part of a crucial 16-mile link between the coal mines of North West Leicestershire and the West Bridge area of Leicester where coal was transferred to boats to be taken to market along the canal network.

Although the tunnel was bought by Leicester City Council for a fiver early this century, many people are unaware of its existence and its route. But the ventilation shafts can be seen in private gardens and — most visibly — near the junction of New Parks Way and Kemp Road.

The Leicestershire Industrial History Society takes thousands of people each year on the guided tours. To book a place on one, e-mail: lihsvisitgt@virginmedia.com

Rotary organiser Jim Matthews proposed a vote of thanks to Chris and his colleagues, saying it had been a fascinating trip which had uncovered many facts not known by even long-term local residents.