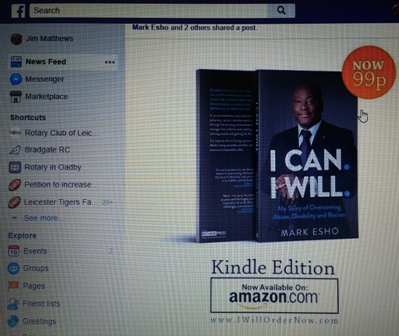 The Facebook page on which Mark Esho announced the launch of his inspirational book I Can. I Will.

CONGRATULATIONS to Mark Esho, who joined the Rotary Club of Leicester Novus about 18 months ago.
At 11am on Thursday, August 9, he posted this video announcing the launch of his autobiography I Can. I Will.

It is a motivating and inspiring story. Pulling no punches, Mark tells how he has overcome polio (he must be one of the last people to contract this dread disease in England), cruelty and being sent to Nigeria for what only the generous could describe as ‘traditional remedies’, to become a successful entrepreneur.

But even back in his native Leicester with business awards behind him, Mark still had to battle against overt racism.

Throughout his continuing battles against physical and emotional pain, he has demonstrated the qualities which we all admire and which are required in members of Rotary.

So when Mark asked to join Leicester Novus, the club’s existing members did not hesitate in saying ;You Can.