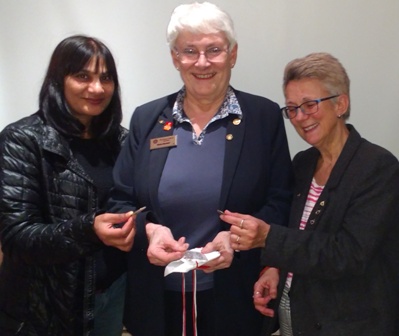 Moira Bartlett shows her Maundy Money to Bakshokaur and Babs

Moira Bartlett not only talked about the Maundy Money she was handed by The Queen at Easter 2017, but she passed the coins round so that members of Leicester Novus Rotary and their guests could touch them and see them up close.

Moira explained the history of the tradition in which the monarch hands specially-minted coins — pennies, twopennies, threepennies and fourpennies  in a white purse and a £5 and a 50p coin in a red purse — to specially-selected pensioners from one diocese (region of the Anglican Church) on the Thursday before Good Friday. Recipients have to be over 70 and to be Christians (although many people of all faiths are invited to the ceremony who have given exemplary service to the Church and their community.The nomination process is secret. In fact, the first Moira heard about it was when she received a letter with the Royal insignia on the envelope.

She was invited to submit a paragraph about herself. She mentioned that she was a former music teacher and former prison governor. Moira became the first woman to join the Rotary Club of Leicester. She used her musical expertise to help run the Rotary Young Musician of the Year competition and has committed herself to serving the community through her Rotary membership and her church by being a member of the Parochial Church Council and running its choir.

Moira described the event held at Leicester Cathedral as being exciting,  “an absolutely wonderful occasion.” The Maundy Thursday service is the only one where The Queen approaches people, rather than them approaching her. With hands cupped in front of her, Moira waited for the Queen (“She is so, so little,” said Moira) to put the two little purses in her hand with the words: “This is for you.”

Babs took advantage of the opportunity to invite members and visitors to the quiz night she is holding on Friday, April 20 at Stoneygate Baptist Church, 315 London Road, Leicester, to raise money for her charity The Carers Centre. To buy tickets, costing only £10 for a team of four to six, e-mail enquiries@claspthecarerscentre.org.uk 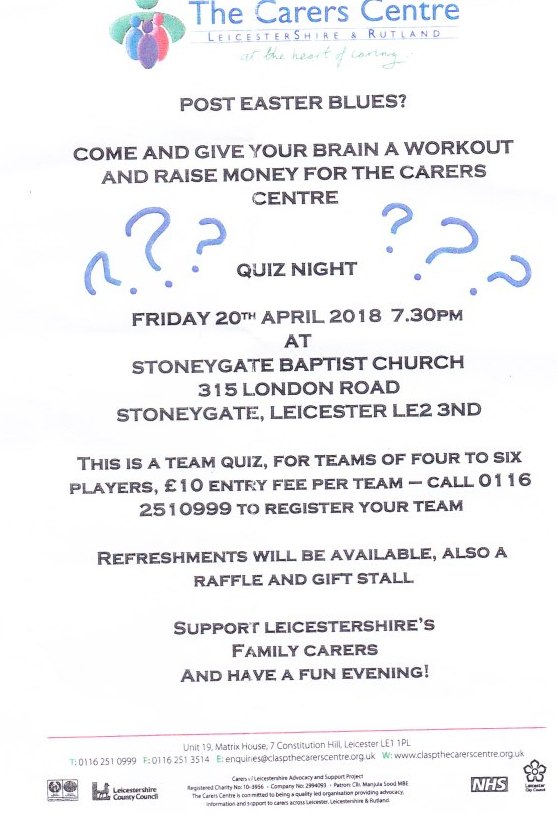