Providing support for those living with dementia

Novus had two speakers for the price of one when they invited Dementia UK to send a representative to speak about the challenges faced by people living with people with dementia.

Gwyn Jones spoke movingly about her husband who was diagnosed with dementia in 2012. “This is a disease… not a natural part of ageing,” she said. Gwyn said dementia was first mentioned in 1756 and that there are 256 types of dementia, including Early Onset (ie diagnosed before the age of 65), Vascular Dementia, Frontotemporal, which can lead to very significant personality changes.

Initially, Gwyn was able to look after her husband at home and take him to memory clinics. Despite having two supportive daughters, Gwyn was unable to cope and had to persuade her husband — who has a bachelor’s degree and two masters degrees, all in different disciplines — to surrender his driving licence. But eventually he had to move into a care home which accepts dementia patients. 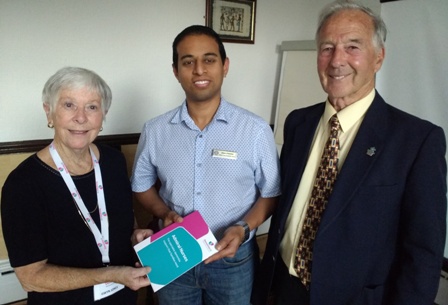 Now Gwyn campaigns for Dementia UK to raise funds for Admiral Nurses. These are specialist, highly-trained and highly-skilled nurses. At the moment, there is only one in Leicester, but that nurse is attached to BUPA. Soon, LOROS will have another, but one contracted to the hospice charity. There is no National Health Service cash for Admiral Nurses. Within the last year Gwyn and her colleagues have raised nearly £50,000 for an Admiral Nurse to work in the community in Leicestershire. That will be matched by Dementia UK nationally.

Gwyn is convinced that having Admiral Nurses to help dementia patients live in their own homes for longer can save the NHS huge sums of money. “I am sure that with help from an Admiral Nurse, I could have had my husband at home for at least another six months,” Gwyn told the Rotary club.Each Admiral Nurse, it is thought, could provide vital support to about 90 families.At the moment, far too often, a partner will have to give up a career to care for a partner with dementia.

Gwyn was accompanied by John Evans, whose wife was diagnosed with dementia in 2008 and died eight months ago. He cared for her at home as long as he could but he had to pay for her to live in a care home for 30 months. The cost of a care home able to look after dementia patients can be £1,000 per month.

John is a supporter of Dementia UK, and is also a Dementia Champion with the Alzheimer’s Society. Earlier in the day, John had been giving information about dementia to firefighters. He explained that people with dementia often cause fires by, for instance, putting electric kettles on gas hobs. He hopes that other emergency services will also want to receive this information.

John was wearing a badge showing the he was one of 2.5 million volunteer Dementia Champions. The Alzheimer’s Society now hope to have four million such champions by 2020.

The talks by Gwyn and John clearly touched a nerve with several members of their audience as questions turned into a detailed conversation with members who have personal and professional knowledge of the issues involved.

Gwyn explained that John had accompanied her as a back-up because sometimes she has to drop everything and rush off to her husband’s care home to deal with an emergency.

For more details about Dementia UK and its appeal for specialist community nurses in Leicestershire, please click here