Rainbows: Where parents get to be parents 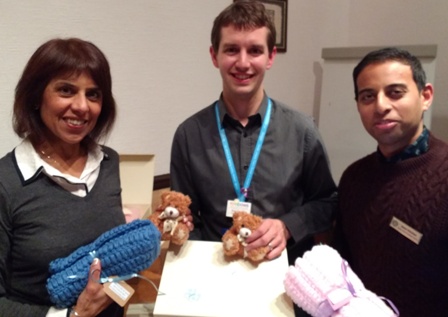 Jasbir Mann and President-Elect Jason Chauhan with Gary Farnfield. of Rainbows Children’s Hospice and the memory boxes given to parents

Community Fundraiser Gary Farnfield returned to update the Rotary Club of Leicester Novus on Rainbows Children’s Hospice since his visit a year or so ago.

He reminded members that the hospice opened in 1994 to help the families of young people aged up to 30 with life-limiting illnesses and conditions. When he last spoke to us the Loughborough hospice, which opened in 1994, had 320 patients from all over the east Midlands. Now it has 360 on its books.

With support from four local GPs, the hospice is not like a hospital, but more like a well-appointed hotel where young people can enjoy what is left of their life. The 24-hour care can be labour-intensive. For instance, if a child with a breathing tube wants to swim, it can involve five of the 160 members of staff being in the pool with the patient.

“It’s not a sad place,” says a mother in a moving video Gary showed us. Another said: “My daughter knows no other life… for her, this is normal. I’m happy if my daughter is happy.”

Gary said: “Rainbows is a place where parents can get to be parents.”

He showed acting president Jason Chauhan and past president Jasbir Mann, a headteacher, the memory boxes donated by supporters. These contain teddy bears, candles, balloons which can be inflated for a balloon release in memory of the child, and blankets.

Among other items included is a mould for casting prints of the feet of babies. The boxes bear the inscription: “No foot is too small not to leave an imprint on this world.”

After members thanked Gary, they left the meeting discussing the various ways the club could help the charity raise the £5.5 million it needs every year to keep running.