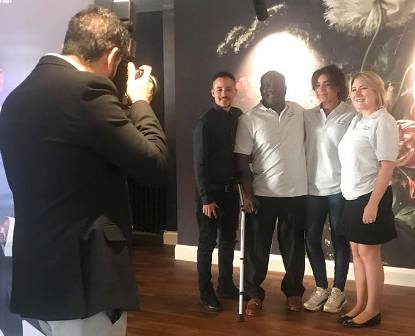 In the spotlight: The Esho family. Mark and Diana with Ren and Esmee

Several members of Leicester Novus Rotary Club attended the Leicester launch of the book I Can.I Will. written by fellow-member Mark Esho.

His hard-hitting book tells how Mark contracted polio just before his fifth birthday. He is brutally honest in recounting how he had to overcome discrimination because he was the only Black boy in Newbold Verdon and then how he had to fight back when he was sent to Nigeria from where his parents came to Leicester before he was born. There, he was subjected to more shameful treatment in the false name of ‘treatment’.

When he returned to Leicester he still had to battle against discrimination based on his race and his disability caused by polio.

Even though he could hardly walk, Mark strove hard with his wife Diana to become an internet entrepreneur.  He went on to win an award from the Institute of Directors.

On October 4 Mark is holding another launch party in London, hosted by Rotary, the organisation which has spent 30 years trying to rid the world of the disease which even now makes it very difficult for Mark to get around, even with a walking stick and a mobility scooter.

His fellow club members were delighted to witness Mark’s Leicester book launch… and getting a preview of the venue, the Queen Victoria Arts Club https://www.queenvicleicester.com/ opposite the Curve Theatre, which is not due to open until October 18. Members were very impressed by the nibbles, drinks and service they enjoyed at this exclusive,  top-notch venue run by Cassie Soulsby.

They were also impressed by the issue of the magazine DLuxe www.Dluxe-Magazine.co.uk featuring Mark’s story, whose Managing Director Kevin Urquhart was also present at the Leicester launch.

Among other guests was new Lord Lieutenant Mike Kapur, Leicester Riders boss Kevin Routledge with some of his players. Marek and Diana sponsor the Riders.