Rotarians step back in time 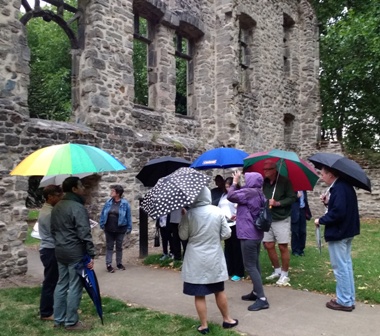 Umbrellas up as Rotary starts its tour of Abbey Park

Fourteen members and guests of the Rotary Club of Leicester Novus stepped back in time on August 9 when Penny Brown, who is in charge of volunteering efforts in Leicester City Council’s parks, gave them a guided tour of Abbey Park.

It’s ten years since Penny last conducted such a tour. She came ‘out of retirement’ as a favour to the Rotary Club with whom she has collaborated several times in recent years, working to develop a ‘pocket park’ near Leicester Tigers ground which now boasts a super mural and planting crocus bulbs near the boating lake in Abbey Park.

Penny’s tour took the visitors all around the site of the abbey established there in 1143. The church was enormous — of similar height to Westminster Cathedral. Leicester Abbey was one of the wealthiest Augustinian abbeys in the country but when it was dissolved in 1538 on the orders of King Henry VIII. Its lead roofs, lead pipes from the Rive Soar, tiles, windows and doors were sold off along with its furniture and fittings. Even the walls were dismantled and the rocks and bricks used to develop elsewhere.

It was left to fall into total disrepair until Leicester architect and archaeologist W K Bedingfield studied other abbeys and made educated guesses about the layout of the site.

Those guesses, explained Penny, turned out to be pretty accurate. Bedingfield laid out the low walls the Rotary guests saw and most were in the correct places, so that even the lavatories were accurately located.

All agreed that Penny’s depth of knowledge and her ability to audibly and entertainingly share that knowledge in constant rain made for a fascinating Rotary meeting.

One of the Rotary guests was author, poet and Bollywood actress Shahnaz Rizwan who generously donated an anthology of her poetry to the Rotary club in the hope that it can be used in some form of fund-raising.