Sarita reports back from Kenya, as old friends meet

Presidents Jason Chauhan, and Ann Saunders, of the Rotary Club of Blaby Meridian, with Rotarians Vasant Kalyani and Sarita Shah

The Friends of Kianjai Kenya was the subject of an illustrated talk by Club member Sarita Shah.

It was appropriate, because in the audience was not only Novus members, but visiting Rotarians Diana Esho, of the Rotary Club of Leicester, wife of Novus member Mark. Diana was there, in part to receive further donations of bras for the Your Smalls Appeal she has founded.
From further afield was Rotarian Vasant Kalyani, who knew Sarita and her fellow member Maya Vansia from when they had all worked at Leicester City Council. Vasant now spends half his year in Ahmedabad, Gujarat, where he is a member of that city’s first Rotary Club. Vasant exchanged banners with Novus president Jason Chauhan.

Vasant was recognised by the third visiting Rotarian, Ann Saunders, who is president of the Rotary Club of Blaby Meridian, the club to which Vasant used to belong before he joined the Indian club. 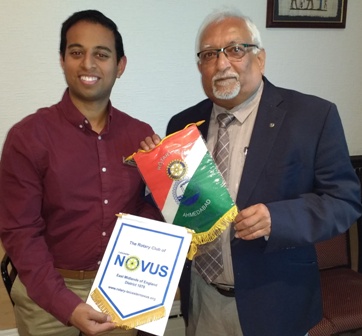 Several in her audience knew the Kenya that Sarita visited earlier this year — the country she left as a five-year-old.
Sarita returned as a result of a talk to Novus last year by Caroline Newton, a member of the Grantham Kesteven club, about the Friends of Kianjai, Kenya, which is supporting a community near Meru, the town near the national park north of the capital, Nairobi.
As well as visiting her cousin during her week-long stay, Sarita visited several schools, including one for children with Special Educational Needs, and churches. The Friends of Kianjai Kenya are hoping to use an $82,000 USD Rotary Global Grant to improve water provision so that the communities can grow crops and become self-sufficient.

ita showed many photographs, including some of the 300 children who are being educated only because they have been sponsored.
In proposing a vote of thanks to Sarita, Novus president commented that all the people in the photos had been smiling and apparently content with their lot, in contrast to many in the UK who are miserable despite having much more to be thankful for than the Kenyans.