Sewa, a word which links Sikhism to Rotary 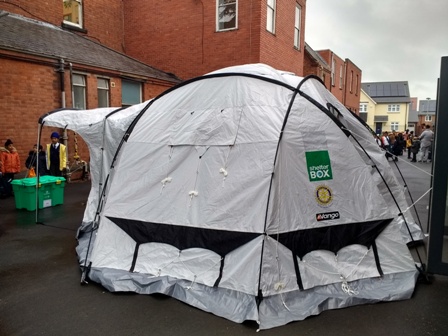 A Shelterbox tent like this can be a temporary home for a family made homeless by a disaster. This one was a gateway to the assembly hall at Falcons Primary School

Sewa is a word which lies at the heart of Sikhism and Rotary.

The Punjabi word means selfless service to God, the Khalsa and the the wider community. It is a principle tenet of Sikhism.

Service Above Self is the creed which drives 1.2 million Rotary members from around the world — people of all faiths and of none. 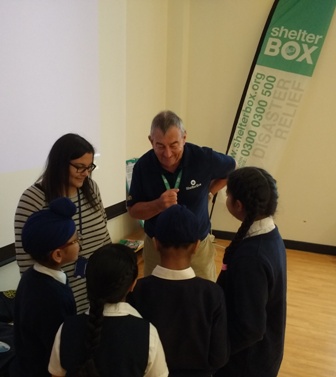 Every one of the 360 or so children walked through the tent to attend the assembly at which Alan Jones explained how Rotary set up the Shelterbox scheme 20 years ago. Nowadays it is a self-contained charity based in Cornwall. Every year Rotarians and others raise the £590 to provide each one of hundreds of big green boxes which contains a tent which will become home to a family of up to maybe 10 or 12 people who have lost their homes through cyclones, floods, volcanoes or earthquakes.

Even as Alan and Ken were explaining the charity to the very polite but inquisitive children Shelterboxes were being dispatched from the charity stores to the typhoon-hit Philippines. 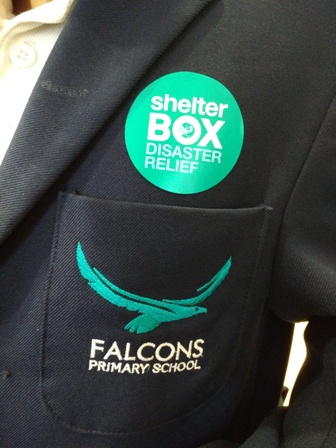 At the suggestion of Mrs Mann, the school’s Year 3 children have eagerly accepted the challenge to think of ways they can raise money to add a Shelterbox to the store ready for the next human tragedy.

In addition to the tent, the big green plastic box (which when emptied becomes a water cistern) includes a multi-fuel stove, pots, pans, crockery, cutler, waterproof but warm blankets, water filters, and a blow-up solar-powered lights which many people remember seeing on the TV show Dragon’s Den.

The Year 3 children’s efforts will be guided by teachers Miss Krishna Popat and Mrs Suman Manon.

Sewa does not end there. Other year groups have their own sewa (service) projects. Year 1 pupils will be taking part in the Bubble Rush fun run in Leicester for the Rainbows hospice charity on Sunday, September 22, where they will meet some Novus members who are helping Rainbows by being safety marshals.

To learn more about Shelterbox, e-mail Novus via the Contact page on this website, or visit https://www.shelterbox.org/

To learn more about the recent announcement that the trust which runs Falcons Primary School’s is now planning to open a secondary school, please click here