Smiles and songs as Peace Pole is unwrapped 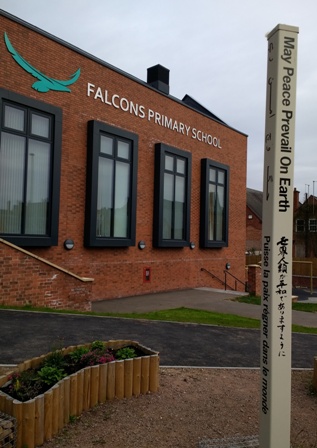 May Peace Prevail On Earth… the sign at Falcons Primary School

A two-year Rotary project has been officially opened.

Frazer Robson, Foundation Officer for the Rotary Club of Leicester Novus and Rotarian Jasbir Mann, who is head teacher at the Falcons Primary School, Gipsy Lane, Leicester, put together the grand design for a Peace Garden at the school. 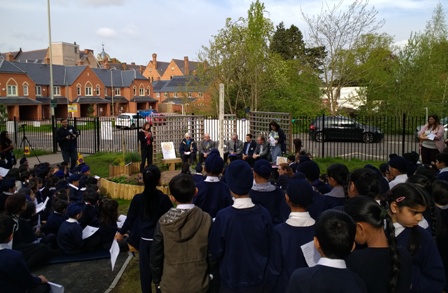 Together they applied for a matching grant from the Rotary Foundation, the world’s largest  independent charity, which is part of Rotary’s global effort of promoting peace. The charity gave half the £2,000 needed for the project, which has turned a muddy, wild area on the school site into a planted area of tranquillity. 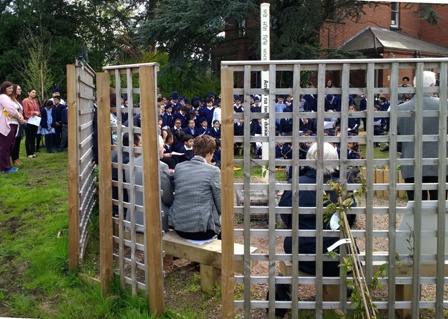 When plants grow up this trellis, it will form a scented backdrop to the water feature

Most of the planning – and much of the hard manual labour – was done by Matthew Herbert of the Leicestershire Wildlife Trust with his colleagues. The centrepiece of the Peace Garden is a solar-powered water feature next to the 8ft tall Peace Pole bearing the message ‘May Peace Prevail On Earth’ in eight different languages.

The pole was donated by the Rotary Club of Oadby Launde, whose member John Niblett did much of the landscaping work. John was joined by club members Lesley Newton and Assistant Governor Nigel Aaron, who opened the garden on behalf of the District Governor.

Fraser, Nigel and Jasbir thanked the many others who had helped make the dream a reality, including the Woodland Trust, which gave 240 trees to provide a hedge bordering the area. Also thanked was school premises officer Viren Shah and the 15 students from De Montfort University and others who gave time – usually in bitterly-cold conditions – to clear the ground and plant the flowers and trees.

The trees helped Novus far exceed the target set by this year’s Rotary International president of planting one tree for every one of the world’s 1.2 million Rotarian. With only 19 members, Novus beat its target ten times over.

The purpose of the Peace Garden, headteacher Jasbir Mann told the 260 children, teachers and guests, is to provide an area where pupils, staff, parents and visitors can ‘chill out’ and think about what the word Peace means to them. Many of the children placed painted stones bearing their chosen word at the base of the Peace Pole. 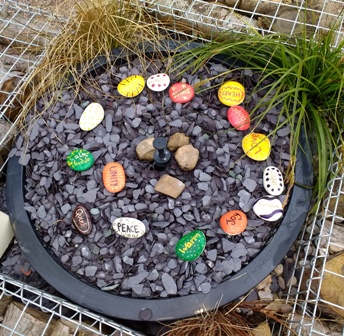 Peace. Unity. Warm. Love. Health. Some of the stones painted with words pupils say sum up the meaning of Peace. The stones were placed in the water feature of the Rotary Peace Garden

At the start of the ceremony, it looked like a Maypole festooned in ribbons. As all the children – and some of the guests – sang songs, some of the youngest pupils walked around the pole, gradualling unveiling the messages of Peace.

President Pradeep Popat said: “We hope this area will be a real and lasting benefit to all who visit this school. It has shown how Rotary – helped by others – can make a great difference in its local community.