Like every Rotary Club, Novus is always pleased to welcome visitors. For our meeting at The Grange Farm pub in Oadby we had thousands… far too many to count.
They were brought by Melvyn Dines, who spoke to us about his hobby of beekeeping. 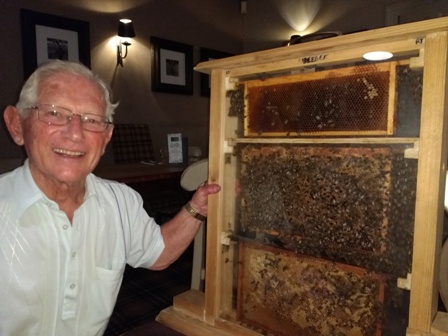 Melvyn Dines and just a few of his bees. They all behaved

All the thousands —  there can be as many as 50,000 in a full hive — that Melvyn brought in their perspex-walled demonstration box stayed inside as he described how he took up the hobby on his retirement and how his bees, based in a hive at Gaulby, produce 50 jars of honey each week during the summer.
He said that the first honey harvest takes place at the end of May when his bees have plenty of oilseed rape to gather nourishment from and the second comes when the field bean flowers produce a honey that is delicious, with a hint of mint.
Melvyn was invited to speak by club president Jason Chauhan. The pair have known each other for many years and Jason helps design the various order forms that help Melvyn sell his honey through several outlets, including Leicester’s major hospitals.
The bees were not the only visitors, though.
Present was Colin Derrick, president of the Rotary Club of Leicester, who was learn more about bees and the threats to them, including the varroa mite and the Asian hornet. Both pose a real threat to bees — and therefore to humans.
Albert Einstein wrote that “If the bee disappears from the surface of the Earth, man wouldhave no more than four years to live. No more bees, no more pollination… no more humans.”
Also visiting from he Leicester club was new member Diana Esho. Diana thanked the Novus Rotarians for the donation of £150 to help the next shipment of bras and sanitary packs to The Gambia from the charity www.yoursmallsappeal.org which she supports.
She was also there supporting her husband, Mark, who signed copies of his inspirational autobiography I Can. I Will which will be launched in Leicester and London next month. It tells how he overcame polio and cruelty to build a successful business with Diana. 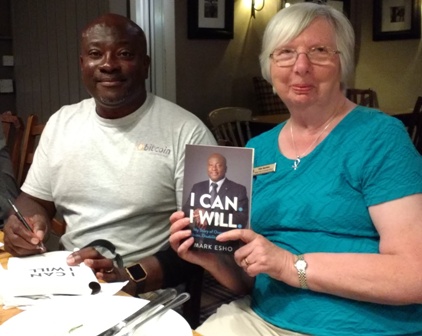 The other visitor, instantly recognised by some of the Novus Rotary members, was Bollywood star Shahnaz Rizwan, who that day moved into a new home in Leicester.
If you would like to visit a meeting of Leicester Novus Rotary even when we are being busy bees delivering Service Above Self projects to help other people, please send an e-mail to rotary-leicesternovus@gmail.com