Members of the Rotary Club of Leicester Novus were praised after presenting their plans for the year from July 1, 2015 to June 30, 2016.

The praise came from assistant governor Les Aldrich, who said the club was clearly very lively with members committed to giving service. 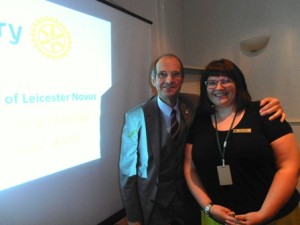 Among the proposals accepted by members were plans to support Young Writer and Young Musician competitions, identify and sponsor a youngsters to go on an exchange trip to China and to continue to work with Leicester Rotaract Club.

To promote membership, the club committed to attending and assisting at even more community events and to distribute information about Rotary membership and to hold a meeting to promote interest in the club. The club will seek to become a partner channel on local TV and to exploit social media.

In April next year, club members will run a Know Your Blood Pressure event to help prevent strokes and heart attacks. They will take local people on a canal boat trip and work with local communities to beautify parts of Leicester. If they can find a suitable candidate, they will sponsor a disabled young person to go on a week-long adventure holiday.

Thanks to the generosity of one of its businessman members, the club will seek to sponsor one of three apprentices on a vocational visit to India. The same business will invite local schoolchildren to visit in order to get a taste of what life is like after school years.

International projects to be undertaken include supporting Shelterbox, Jaipur Limb and Life Straw. A grant will be sought from the Rotary Foundation — the world’s biggest private charity — to create a Peace garden at Falcons Primary School in Leicester.

As though to reinforce the youthful and playful nature of the club, incoming President Gemma Kiddy announced that on June 12 2016, it will celebrate its seventh birthday with a party of the sort that seven-year-old children enjoy, including plenty of cake and a bouncy castle.

Gemma, who works in arts administration, asked members to back her choice to support the Spark arts for children as well as the Rotary Foundation.

Unanimously, they agreed to do so.