Intercare guide Carol Austin, in the red, with Leicester Novus. The Pal boxes are from a Leicester firm which donated life-saving equipment to Sierra Leone during the ebola epidemic

A baker’s dozen of Leicester Novus Rotarians visited the Syston warehouse of the charity Intercare www.intercare.org.uk/ which has been sending drugs and other medical equipment valued at more than £12 million to Africa since 1974.

Carol Austin, who recently retired after 22 years as an employee, but is soon to become a trustee of the charity, showed members around and explained how it works.

The charity supports more than 130 health units including hospitals, health centres, dispensaries, orphanages and prisons in some of the poorest areas of Cameroon, Ghana, Malawi, Tanzania, Sierra Leone, and Zambia, reaching more than nine million people.

Most of the surplus drugs and equipment sent have been donated by businesses and 1,400 surgeries in the UK. They are triple-checked, sorted and despatched by an unpaid army of 60 volunteers. The charity employs five people, only two of whom are full time. To ensure that the drugs reach their intended destination, the charity establishes and maintains contacts with the recipients in Africa. 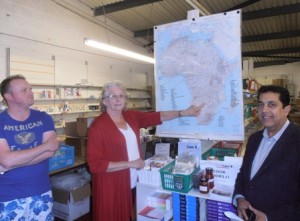 Watched by David Clorley, our guide Carol Austin points to the general area where Pradeep Popat was born

Only about four per cent of medicines sent abroad are bought from wholesale sources in the UK.

The cost of getting drugs to the Syston warehouse amount to more than £15,000 a year and the cost of sending them ­ by post rather than courier – is about £50,000 a year.

Carol paid tribute to the many Rotary clubs across the UK – and mentioned particularly the Rotary Club of Blaby which has supported Intercare for many years – who raise funds to enable the charity  to continue its life-saving work and who encourage doctors to donate medicines.

She also mentioned Leicestershire firm Pal Wear Ltd which donated a lot of gowns and gloves as barriers for the medical staff who worked in Sierra Leone during the ebola epidemic.

After their visit, the Rotary party enjoyed a delicious meal at the nearby Spice of India restaurant run by Atul and Heena Dawda, members of the Rotary Club of Melton Mowbray