From asylum seeker to media mogul

Romail Gulzar, Managing Director of Pukaar News Ltd, told the Rotary Club of Leicester Novus the remarkable and moving story of how he fled his native Lahore as a persecuted Christian and became Managing Director of a media group which publishes a glossy quarterly magazine in Leicester and which provides video journalism to dozens of broadcasters in the UK and abroad.

Even as a small boy from a poor family, Romail knew his vocation — his calling — was to journalism. He started by writing a two-sided A5 newssheet for his church circulated among a few families. After its value was recognised by a visiting Archbishop, it soon doubled in size. 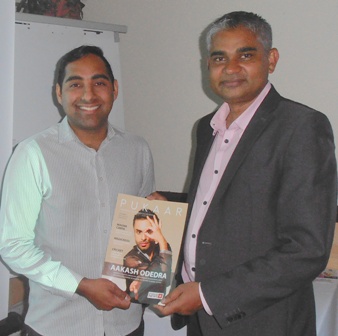 Many Christians have been killed in Lahore. Romail found work in hotels in Dubai but continued writing. He came to Leicester, where he had family and friends, as an asylum seeker in the year 2000. He went to Southampton where he suffered a physical attack as many asylum seekers do. But it was there that his voluntary work earned him an award from Tony Blair.

Funding for that church project ran out in 2006. The following year his wife died in Pakistan shortly before she, their son and daughter were due to join Romail here. Romail moved back to Leicester in 2010 and completed a media course before setting up Pukaar the following year.

With a staff of four, working on an freelance basis, Romail’s agency works on local, national and international stories from Phoenix Square. But his business card does not describe him as MD; just as “Video journalist”. For that is what Romail is.

He explains that in Urdu, Pukaar means to be called. For himself, he is happy to interpret that as being called by God.

Romail’s enterpreneurism and altruism continues; his agency has been nominated for another award and Romail himself is a member of the diversity panel for ITV News. Recently he has become chairman of Leicestershire and Rutland Crimestoppers.

To read Pukaar News online (where you might soon find an article about Leicester Novus Rotary Club), visit www.pukaarmagazine.com

Incidentally, one of Romail’s interests is steam railways. In that context a mogul is a locomotive of 2-6-0 wheel arrangement — like him, a real mover sand shaker.