From Curry Club to Canal Boat

The Rotary Club of Leicester Novus enjoyed a busy couple of days.
It started with a most enjoyable social evening at The Tamarind Restaurant in The Peepul Centre where Diana Thurston had convened the latest meeting of our Curry Club.
We welcomed a former member of the club, six other guests and one visiting Rotarian who had been up since 4am ready for a meeting in London in advance of his visit to Ethiopia on Monday.

He and other guests asked to be invited back.The Leicester Novus Curry Club next session is scheduled for January 28, 2016 when again excellent food and excellent company will raise more money for Rotary projects. 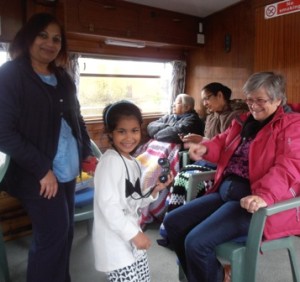 Sarita Shah and Sally Matthews with Sarita’s neice Shriya. Despite having the binoculars, Shriya did not see the kingfisher which others did

The following morning a party of 19 guests, led by catering manager Sarita Shah and Jim Matthews, gathered at the Loughborough moorings of the Peter Le Marchant Narrowboat Symphony. One was a neighbour taken by Jim and Sally in gratitude for her offer to help the Rotary Club run a walking treasure hunt in her village to help fund future Rotary events. It was a treasure hunt around Tugby which part-funded the boat trip.

Other guests included two families who had previously helped the local charity Menphys www.menphys.org.uk.
Among them was Charlie, celebrating his third birthday by tucking into birthday cake as the narrowboat sailed from Loughborough to Barrow and back and dancing to the music of one-man band Rovin’ Ron.

Charlie could hardly wait to tuck into his birthday cake

Unfortunately, one Menphys family had to cancel on the morning because of illness, but that freed up space for Kathleen, who lives near the moorings and often travels on the Symphony as its mascot and biggest fan. Thanks to skipper John and his crew, the Peter Le Marchant Trust now has more fans.