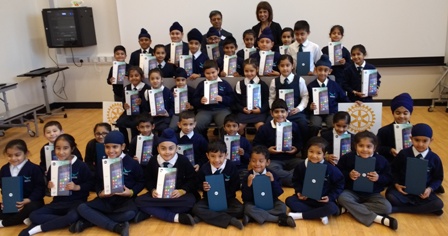 Headteacher Jasbir Mann and Rotary Club Vice President Deepak Karia with children holding the donated tablet PCs. Please click on the photo to hear their thanks

Thirty-nine tablet PCs were presented to Falcons Primary School by the Rotary Club of Leicester Novus.

The presentation was made by Vice President Deepak Karia to headteacher Jasbir Mann, who is also a member of Novus Rotary, during the first assembly to be held in the school’s brand-new assembly/dining hall.

The tablet PCs were donated anonymously to the Rotary Club by a member. Rotary hopes that the donation will help the pupils at Falcons Primary School achieve high standards in their education.

In the two years since the school opened, it has grown from 34 pupils to now having 178.  The school’s admission policy is to have 50 per cent Sikh and 50 per cent non-Sikhs.

The Rotary Club and the school are drawing up plans for a Peace Garden to be developed on the school site. Rotary is an organisation of 1.2 million of members around the world united under the banner of Service Above Self. Leicester Novus ends its weekly meetings with the toast: “To Rotary Fellowship and Peace The World Over.”