The result didn’t matter. It wouldn’t have mattered even if Novus had whupped Oadby, instead of it being the other way round.

The Novus team, augmented by District Governor Nominee Rodney Spokes, Oadby members John Nuttall and Martin Sharp, and Sally Matthews, a member of the Inner Wheel Club of Oadby, was much less experienced than Oadby, which has been playing croquet at Leicester Bowls Club, Victoria Park for several years. 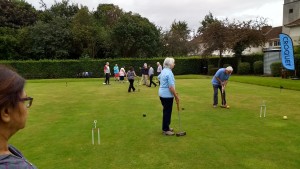 Enjoying the fellowship and the game

Afterwards, over a delicious buffet meal at the Old Horse pub http://www.oldhorseleicester.co.uk/ over the road from the bowling club, Jim Matthews, who was a member of the Oadby club from 1986 to 2014, thanked Richard Baker from the Oadby club for organising the event, which had been enjoyed by all.

Jim Matthews also thanked Richard Whiting and the other members of the Croquet Club http://www.leicestercroquet.org.uk/ for allowing us to use their facilities and for them attending on the evening to advise on the rules, tactics and to generally run things.