The first quarter of 2016 saw four particularly inspirational speakers engage the attention of Rotarians and their guests.

First up, on February 11, was Rik Basra who developed cancer of the blood which very nearly killed him. However, with only weeks to live, a suitable bone marrow donor was found in Germany. After treatment Rik battled his way back to work and retired after completing 30 years as a police officer. He subsequently started working for Leicestershire County Council. 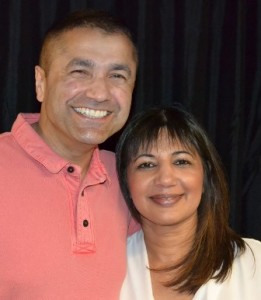 With his wife Kas, he has set up the Rik Basra Leukaemia Campaign and succeeded in getting thousands of people aged between 16 and 30 to join the register of potential donors.

Rik’s talk was not only moving, but inspired several members to commit to help during his charity’s future campaigns to enlist more potential donors.

A fortnight after Rik’s talk, the club welcomed Terry Watts, of the Rotary Club of Blaby, who was District Governor in 2002-2003.

Terry’s subject was the Toys on The Table appeal which provides thousands of brand new toys and arranges to deliver them to needy children across Leicester and Leicestershire.

Some of the older — or longer-serving — members remember when the organisation was first established in the 1980s and the comparatively-chaotic sorting office then in the Newarke premises which later became the offices of Voluntary Action Leicester. 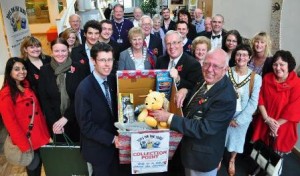 Terry Watts with Toys on the Table supporters

Terry gave a very detailed explanation of how the charity operates nowadays. The huge amount of work which goes on behind the scenes in the home of Terry and his wife Margaret and in the charity’s base in Matrix House near the Leicester Mercury building is astounding. A computer database allows Terry and his volunteers to properly match suitable toys with boys and girls of specific ages.

Apart from donations of brand-new, toys in their original packaging, the charity needs helpers each November and December. Once again, members of Leicester Novus indicated their willingness to help out.

Three weeks later, Leicester Novus welcomed another Rotarian speaker. But gynaecologist Roger Neuberg, of the Rotary Club of Oadby, was not tasking with speaking about Rotary matters. He could have, because in the spring of 2015 he was given a prestigious award marking his part in raising more than £140,000 to provide 32 motorcycle ambulances in Uganda which have already saved dozens of lives.

Just before he spoke to Novus, Roger heard that he is to receive another very Rotary award in April 2016, this time at the House of Lords.

Roger Neuberg on ‘Millionaire’ in 2000

The subject of Roger’s talk on March 10 was his experience as a successful competitor in Who Wants To Be A Millionaire in the year 2000.

Roger revealed that before his appearance, he became obsessed with the heartbeat-mimicking signature tune and decided that he simply had to get on the show, hosted by Chris Tarrant.

He had to make £400-worth of phone calls before he got accepted onto the show..

The tension built as Roger showed a recording of the programme with the signature tune quickening as Roger progressed through the stages, including him seeking help from the audience and telephoning his GP son.

Roger’s success clearly struck a chord with the public… even 16 years later people remember his appearance the amount of money he won.

The most recent of our inspirational speakers in the first quarter of 2016 was John Dabrowski.

John is a former international and professional basketball player who still holds the British record for the most points scored in a game.- a staggering 98 points.

John spoke candidly about his failures, but concentrated on the positives to have come out of the setbacks he has experienced in his life.

John Dabrowski: A life in balance

Now in business as a motivational speaker, John revealed the methods he employs to achieve goals. One of the major techniques is to create a ‘bucket list’ of images of targets he wants to achieve. By ‘seeing’ his goals, he says, it makes them ‘normal’ and less intimidating when he gets close to achieving them. As an example, he said he had put an image into his ‘bucket list’ representing him on a business class flight to Dubai. That was something he had achieved with a contract to visit that country to discuss delivering motivational talks there.

Rotarians had no doubt that John will continue to have a successful career… providing he takes his own advice!

John and the other speakers had been invited by speaker-finder David Clorley. If you would like to visit the Rotary Club as a speaker or as a guest, please e-mail RotaryClubofLeicesterNovus@gmail.com