Refugees and asylum seekers get a new view 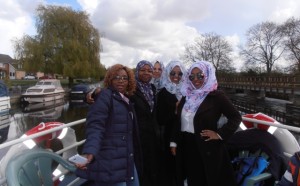 All smiles during the boat trip

Leicester City of Sanctuary is a charity run entirely by volunteers with a range of projects supporting asylum seekers. Seventeen of its members were treated to a boat trip on the Grand Union Canal by the Rotary Club of Leicester Novus, who had collected money from pre-Christmas shoppers in Queens Road, Leicester, to fund the project.

In the autumn of 2015 the club had taken elderly and disabled people on the boat, hired from the Peter Le Marchant Trust. That day was such a success that members decided to do it again.

Most of the passengers on April 27 had no knowledge of the history of Britain’s canal network, nor of the engineering behind the locks. Two of the guests, Muslim women engineers, went to examine them as the boat passed through Barrow Deep Lock.

The volunteer crew of six were amused to notice that old technology was meeting new technology; one of the guests was Skyping a friend in Nigera, giving him a running commentary with moving pictures as the boat slid through the green countryside.

All the guests said they had enjoyed their day out, despite being forced inside by a brief cold and rainy spell, during which a bit of ‘community singing’ proved that everything was going to be all right…

Rotary members Sarita Shah and Jim Matthews, together with Jim’s wife, Sally, enjoyed meeting the 17 guests, who come from a range of different backgrounds and have fascinating and sad stories about how they come to be in Leicester, separated from close and distant family members.

Jim thanked City of Sanctuary organisers Jenny Westmoreland and Jackie Hall, who had arranged the minibus transport to and from Loughborough for the trip and the delicious picnic lunch. He also thanked the Peter Le Marchant Trust and particularly the unpaid volunteers who had given such an enjoyable and eye-opening trip to Rotary’s guests. 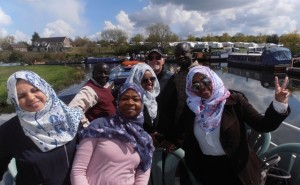