Rotarians tune in to Takeover Radio

Takeover Radio is one of Leicester’s least-known charities.

Its founder, Graham Coley, took time to show a dozen members of the Rotary Club of Leicester Novus around the office and studio.

He explained that he had joined Radio Gwendoline and then Hospital Radio Fox four decades ago and then seized the opportunity when he found some unwanted broadcasting equipment and used it to establish a radio station for young people as a Millennium Project. Nowadays, it costs more than £25,000 per year to run.

Recently retired from his day job, Graham is now employed by Takeover for two days a week. The rest of the team is 32 youngsters aged between eight and 14. They, said Graham, are the stars of the show, choosing the music they will broadcast, selecting and scripting the news bulletins and conducting interviews for shows they introduce and produce. 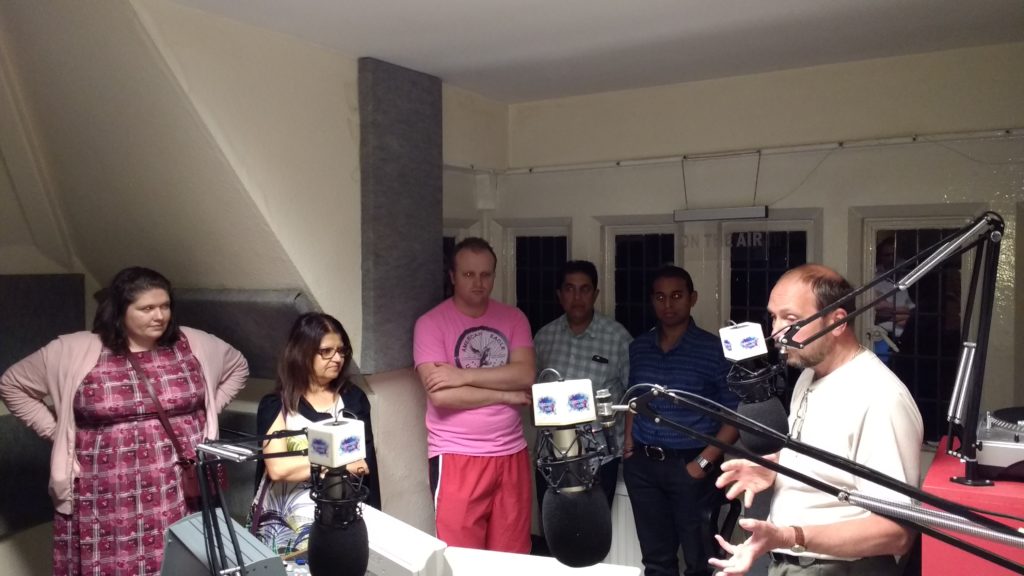 One, Georgia, interviewed Rotary President Gemma Kiddy and it will be broadcast on the evening show, probably shortly after 6.30pm on Wednesday, September 21.

Georgia was particularly impressed when Gemma told her about the various projects for schoolchildren that the Rotary Club of Leicester Novus is supporting this year.

To hear what Gemma said, tune in to Sean’s show on Takeover Radio on 103.2FM or visit http://www.takeoverradio.com/schedule-1032.html

Takeover’s reason for being is to train young people. It has been very successful with ‘graduates’ working all over the world, including with the BBC, Sky, and several independent broadcasters.

It might be one of Leicester’s least-known charities, but it has helped hundreds of young people achieve their dreams of becoming big names in broadcasting.