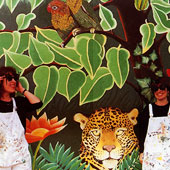 More than a dozen volunteers transformed a ‘pocket park’ at the junction of Aylestone Road and Walnut Street in Leicester on St George’s Day.

In June 2015, members of the Rotary Club of Leicester Novus agreed to undertake a community service project in the local environment. The club asked Leicester City Council to identify a somewhere and the council chose the area just over the road from the new stand at the Leicester Tigers rugby club.

The much-admired mural of jungle animals painted there a couple of decades ago had become old and had been defaced by graffiti. Residents wanted the area to be cleaned up.

In the autumn of 2015 the council removed some shrubs and started to prepare the site. Volunteers came forward after approaches by the Rotary Club and the the city council. Unfortunately, the weather was too cold on the December day first selected.

But the delay meant that even more volunteers were recruited for the April 23 event. They included Rotary President Gemma Kiddy, several Rotarians and friends of Rotary, Rotaract chairman Jon Kingsley Mills, several students from De Montfort University who did the work under the auspices of the DMU Square Mile Project http://www.dmu.ac.uk/about-dmu/dmu-square-mile/dmu-square-mile.aspx, residents and ward city councillor Bill Shelton.

Starting at 10am, under the direction of city council staff Vicky Hudson and Penny Brown and using city council tools and materials, some of the 14 firstly cleaned off peeling paint and loose plaster from the walls. Others scrubbed clean the six circular planters while others prepared the traffic bollards for a makeover.

Then the walls, planters and bollards were repainted. Weeds and rubbish were removed.

At 2.30pm Phase 1 was completed with thanks being expressed by Vicky and Penny from the city council and Gemma from the Rotary Club.

All the volunteers said they had enjoyed the fellowship of being involved in a community effort which had yielded an immediate and striking improvement to the community.

They are looking forward to Phase 2 when the area will get another mural. But what will the mural show?

The decision will rest with Dindy Outen, the city council’s Arts Advisory, Interpretation and Grants Officer and her team. The volunteers, including Councillor Shelton, discussed the idea of engaging residents and local schoolchildren in helping to choose the theme for the new mural.

Some volunteers favoured the idea of a mural which reflects the success of Leicester City, Leicester Tigers, the city basketball teams and the county cricket club. 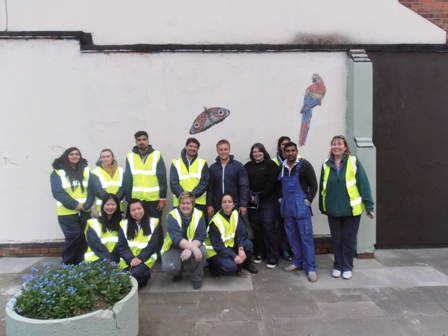 To keep in touch with the decisions, keep coming back to this website.

If you have an idea for a new mural, or you would like to join another Novus project, please e-mail rotaryclubofleicesternovus@gmail.com 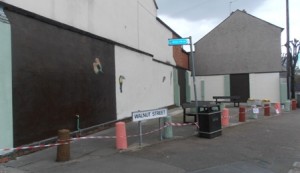 The cleaned-up area. What would you like to see replace the old mural?