Artist Leigh Drummond has been widely praised for the work, which has greatly improved the ‘pocket park’ on the corner of Walnut Street and Aylestone Road, immediately over the road from the new Robin Hood stand at Leicester Tigers..

Among the first to praise Leigh was Simon Breddy, Neighbourhood Housing Officer for Midland Heart, owners of the longest wall on which the mural has been painted. 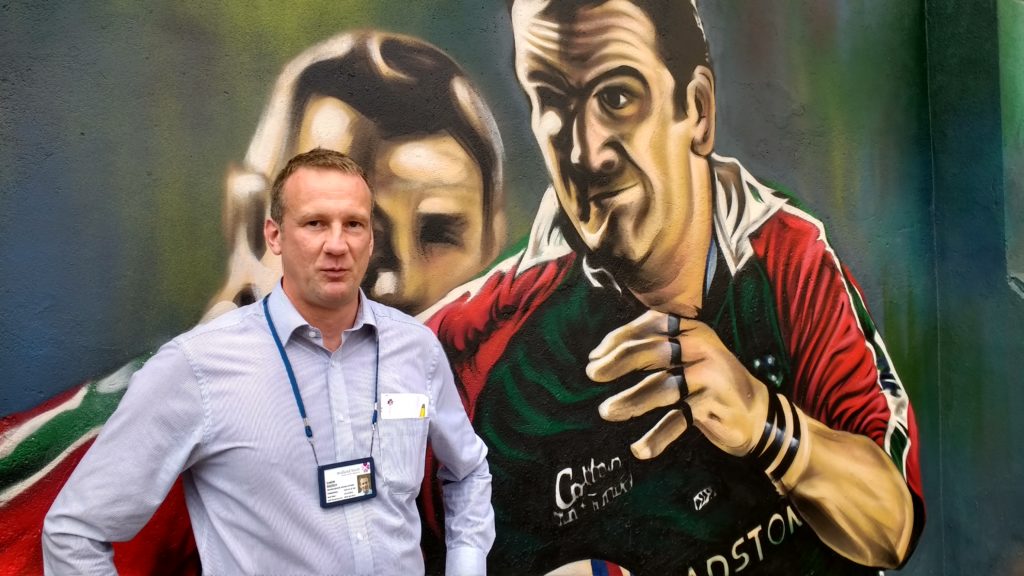 Simon Breddy, Neighbourhood Housing Officer for Midland Heart, owners of the mural wall, comments on the ‘uplift’ the mural has brought to the area. Click on the image to hear him.

Ward councillors Elly Cutkelvin and Bill Shelton, who helped with the preparation of the area for muralist Leigh, also commented, thanking the volunteers from the Rotary Club of Leicester Novus and students from the De Montfort University Square Mile Project. 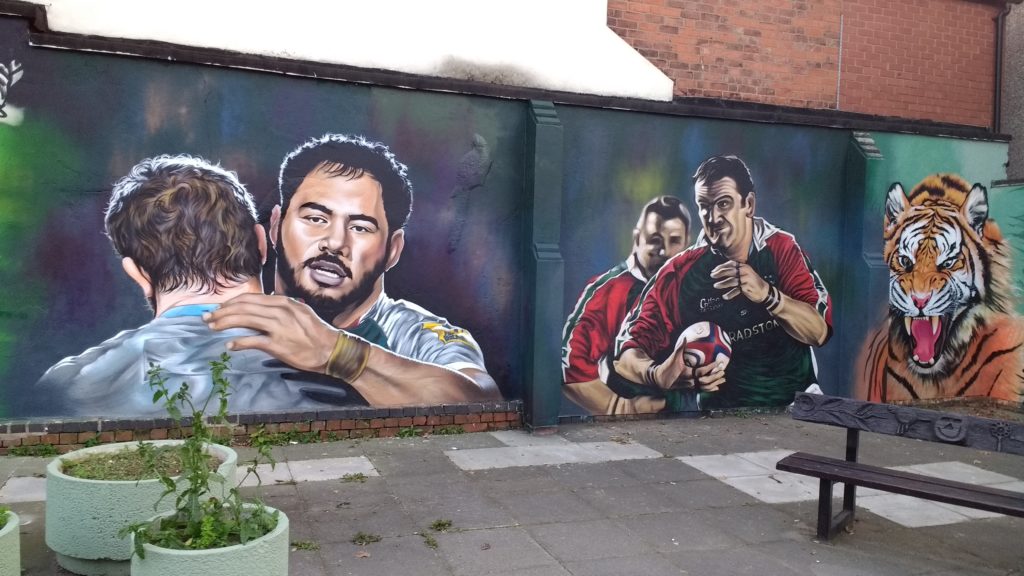 Part of Leigh Drummond’s mural showing Tigers stars Manu Tuilagi and Martin Johnson. Click on the image to hear them

Leigh Drummond was pleased to hear the comments. You can hear him by clicking on the image below. It’s very much a local project for Leigh. He was born in Leicester Royal Infirmary and lives near the gas board museum in Aylestone Road. He makes a living from all sort of visual art, including comics. 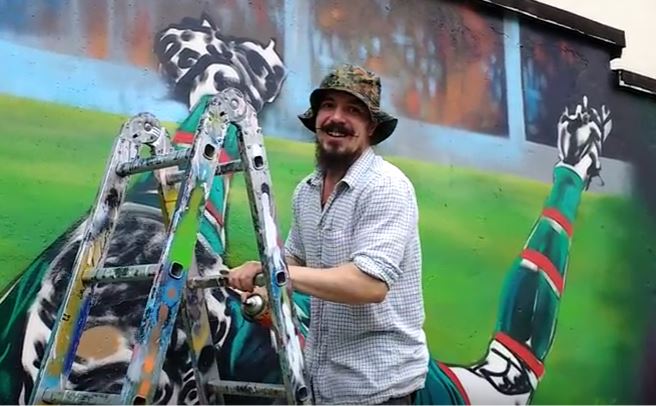 Muralist Leigh Drummond is pleased by the comments he has heard. You can visit his website by clicking here

Novus members Frazer Robson and Jim Matthews, a long-standing Tigers fan, were first involved in this Rotary project about a year before it came to fruition. At about the same time that the local councillors were expressing concern about the run-down site, Frazer and Jim were given the go-ahead by the Rotary Club to identify an area needing some TLC. After a site meeting with Vicky Hudson and Penny Brown, from the city council, it was agreed to proceed and to get some help from others.

“We were very fortunate to get great support from Rotary, friends of Rotary and students from the De Montfort University Square Mile Project. They turned out for several hours on a cold Saturday and worked really hard to prepare the walls for Leigh’s super talent,” said Jim. “Without them, we could not have done it. And so, without them, Leigh could not have done it, either.

At the very end of August, Frazer and Jim again met Penny Brown, who has identified another area of the city — alongside the canalised section of the River Soar known locally as the Mile Straight.

It’s opposite the Soar Point pub and near to DMU student accommodation. “So we are hoping that we might be able to call on the students again,” said Jim.

If you want to help clear up litter and weeds there, please call 0116 292 8267 or e-mail RotaryClubofLeicesterNovus@gmail.com