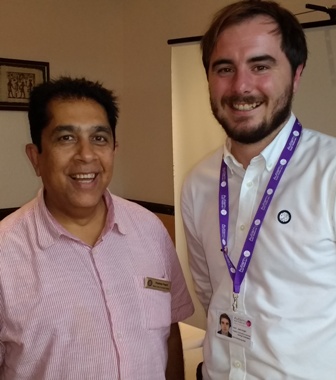 Jack Knight, Graduate Community Fundraiser for Autism East Midlands, engaged club members early on in his presentation by giving each member a “True” or “False” card which tested knowledge of what autism is, who it affects and how it affects them.

It is a lifelong condition without cure which affects 1 per cent of the population. Not all will have learning difficulties, nor will all have problems coping with change and social interactions. But many do.

The charity which Jack has represented since November 2016 started in Nottingham in 1968 when a group of parents of children with autism got together. Now Autism  East Midlands is the largest autism-specific charity in the region.

Jack’s slides showed quotations from two adults who described how autism affected them: “Autism is like a jail… it locks you up and it locks you down,” said one. “Its like a shadow that follows you around… it’s always there,” said the other.

Only 16 per cent of people with autism are in full-time paid work. Helping them and their families is part of the strategy of the charity. One per cent of the charity’s income comes from voluntary sources, but, as Jack said, it is likely that the amount of statutory funding is likely to fall in future, so the charity has targeted increasing donations from the public and corporations.

The charity also wants to expand the work that it does to help autistic people live with their condition. In Leicester Autism East Midlands is undertaking major projects with Leicester Royal Infirmary Children’s Hospital and with De Montfort University, which has 200 students on the autism spectrum.

A vote of thanks was proposed by Jason Chauhan, who was later presented with the President Elect chain of office by Pradeep. Jason is due to become president next July.