Amid the usual Rotary banter when the Rotary Club of Wigston hosted Leicester Novus in the second round of the District Minor sports, there was a lot of talk about the teams’ ability to throw.

The speakers were not assessing abilities to throw the cheeses at the table skittles, but the ability to ‘throw’ the game while appearing not to. The risk of winning the game could entail a visit to some far-flung Rotary club anywhere in the East Midlands. 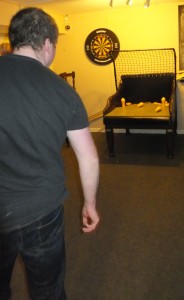 There was no evidence of underhand play — though some strange throwing of cheeses overhand and otherwise — and little to choose between the two teams.

In fact after two rounds, it was all square, so a throw-off was held between Marian Mortimer, who had scored two nines earlier, and Novus captain David Clorley. The result: 7-7.

In the second throw-off Jean Lucas, who had scored a nine previously, scored seven for Wigston. Jim Matthews, for Novus,scored his second clearance of the evening to win it for his new club. 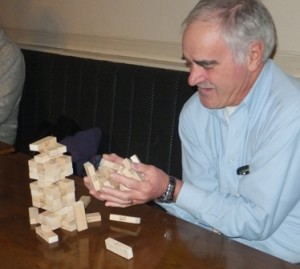 Gone… Peter Mortimer upsets the Jenga tower, but reacts quickly enough to catch most of the bricks

President Richard Green proposed a vote of thanks to the visitors from Novus and to Peter and Marian Mortimer for providing very good meals at the venue, their pub The Nautical William. All agreed that the event had been great fun. There had also been an informal game of Jenga which resulted in a win for Novus as Peter Mortimer bought the house down.

The question is: How will Novus feel about newest member Jim Matthews if his perfect score means they must travel many miles to play in the next round?