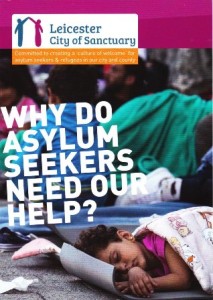 Mick explained that the Leicester group’s 80 volunteers do not ask refugees and asylum seekers to tell their stories, but do hat they can to introduce them to British customs and to agencies that will help. “We are not judgemental,” he said. “We doubt that everyone has a good case to stay.”

But the 1,000 refugees and asylum people in Leicester are assured of seeing friendly faces at the drop-in held every Wednesday at the church hall of Holy Cross Priory in Wellington Street. And of being offered help with English. About 30 volunteers help in this way. Some are former teachers and some come from either Leicester or De Montfort universities.

So far, 220 bicycles donated by members of the public have been passed on to help newly-arrived people get around their new home city. Most are single men, often with family members left behind in the country from which they have fled. About 300 of Leicester’s refugees and asylum seekers are here as families.

Mick explained that refugees was a status established by the United Nations in 1951 when millions of people displaced by World War II. He also outlined the difference in law between asylum seekers and refugees — a distinction made almost uniquely by Britain.

Asylum seekers are those that arrive in this country and must — within 24 hours — present themselves at Croydon, the only place in the UK where they can officially claim asylum. They can do so if they have a well-founded fear of being persecuted for reasons of race, religion, nationality, membership of a particular social group or political opinion in their own country.

They are then sent to one of 70 dispersal centres where they must wait until they learn whether they are accepted by the Home Office as refugees and are granted the right to remain in the UK.

That process is supposed to take no more than six months, but Mick knows of many people who are still waiting more than a decade later and one person who has been here for 19 years and is still waiting to hear whether he will be returned to the country of which he is fearful. 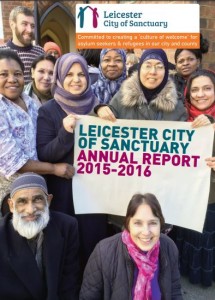 The front cover of the latest annual report of the charity Leicester City of Sanctuary. Click on the cover to read the report

Asylum seekers are not allowed to work, even though many of them are highly-qualified who want to contribute to the UK. Instead, they are granted £37 a week from state funds. Some, largely depending on which country they have fled, might be issued instead with vouchers redeemable only at certain major supermarkets. This, said Mick, means they cannot spend money at smaller shops and in Leicester Market, which might offer the kind of foods they have been used to in their home country.

They cannot choose where they live, but instead are assigned accommodation by the G4S agency. Most of the accommodation is of poor standard. Some asylum seekers have to wait for weeks before they receive furniture donated to charities. The 1,500 people on the Leicester City of Sanctuary mailing list give money and hundreds of smaller items to help the asylum seekers.

The memorable images on TV screens across the world of the three-year-old Syrian boy found drowned on a Turkish beach last September may have partly helped LCOS become the first asylum seekers’ charity to get a Big Lottery grant,which it did earlier this year.

Mick was speaking to the Rotary Club after club members had arranged a trip on a canalboat from Loughborough to Mountsorrel last year. The club is now considering working further with LCOS.