242424Youth Services lead Pam Spokes has been busy introducing a new (to Novus) project called Rotary Stars, which is designed to encourage children to

In asking local schools to collaborate, Pam asked teachers to regard the scheme as

In setting up the citizenship project, Pam made herself available to speak to school teachers about what Rotary hoped to achieve.

And then on March 14, she attended a Celebration Assembly at Mellor School in Checketts Road to present certificates and Rotary Star badges to all 15 shortlisted pupils. The overall winner was six-year-old Neil Patel who also received a £5 gift voucher. 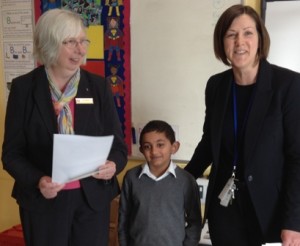 Neil Patel, winner of a £5 voucher and his certificate presented by Pam Spokes (left) with Acting Head Teacher Nik Foster

Neil was nominated by his teacher, who said: “Neil saw a boy outside who did not have anybody to play with. Without being asked, Neil sat with him for the whole of break time to make sure he wasn’t alone. Neil did this without being asked and did not tell me about when he came in. Another staff member saw it and told me about it.

“Neil demonstrates kindness to all members of the class without being asked, he regularly offers to help them and also took it upon himself to help a girl who is from India to settle in to the class by translating instructions and showing her around.“

Mahirah Maleek with her certificate

Arun Dave with his certificate

Valisha Ria Thukral with her certificate

Saha Bachu with her certificate

Annya Panhania with her certificate

Janaki Mistry with her certificate

Afterwards, Pam told the Rotary Club: “It was good to run our first Rotary Stars competition with Mellor Primary, and the school will be submitting another 15 candidates in the Summer Term.”

I was delighted to attend another Celebration Assembly, this time with Jasbir at Falcons Primary on 24 March.   We had received nominations from nine pupils, all of whom received a Certificate and Rotary Star badge.   The overall winner was Marian Bendik (aged 6) who also received a £5 gift voucher. 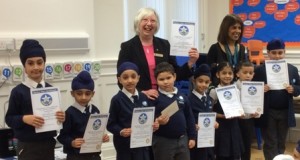 Marian was nominated by his teacher and classmates, who said: “We would like to nominate Marian for being extremely kind and helpful to a new boy in our class who has come from Eastern Europe and finds it very hard to communicate as he doesn’t understand English.   Marian has been very good at explaining things to Rikardo and has impressed everyone with his calmness and patience.  In the playground he tries hard to involve Rikardo in activities and has made an amazing effort to make him feel part of the class.   The whole class unanimously nominated Marian for the award.”

Falcons Primary will be submitting more candidates in the Summer Term.