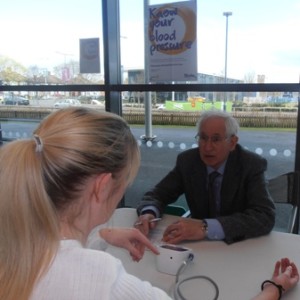 Two hundred shoppers had their blood pressures taken as part of a Rotary free initiative aimed at reducing the number of heart attacks and strokes.

Working together, members of the Rotary Clubs of Bradgate, Leicester De Montfort and Leicester Novus set up stall in Asda, Abbey Lane, Leicester, from 10am to 2pm. Eight medically-qualified volunteers recorded blood pressures of shoppers after Rotary members had filled in forms, which will help the charity Stroke Association add to their anonymous database helping them focus their research programmes into strokes, a major cause of which is high blood pressure.

Mr Trivett thanked the Rotarians, volunteers from Leicester Royal Infirmary and particularly the staff of the Asda store for their generous hospitality and support.

He said: “Rotary in Britain and Ireland is a national partner to the Stroke Association and organises similar events throughout the UK. The Rotary clubs in Leicester have worked together on this annual project for well over 10 years. The Know Your Blood Pressure event is part of a national awareness programme and we are pleased that with the support of Asda, Abbey Lane, we have been able to help the local community.”