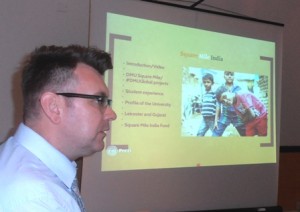 The Rotary Club of Leicester Novus welcomed back Mark Charlton, head of public engagement at De Montfort University, to give an update of the DMU Square Mile India project.

Almost a year ago Mark told the club about the university’s commitment to the Leicester community with its Square Mile project and its outreach plans for India.

In the last year or so Mark has travelled three times to India, and has just returned from the Gandhi Ashram in Gujurat where university Vice Chancellor Dominic Shellard had met Dalit (‘untouchable’) children.

The Square Mile India project aims to provide education and raise living standards. Its launch, in January, started with an appeal to support 120 children, at a cost of £20 per month each.

But just as quickly, a number of projects involving research and development projects in Leicester sprang up. Several students from Leicester — some from Gujurati backgrounds — have been there this year on bursaries working on projects to promote good health improved educational opportunities.

Mr Charlton said the university has now provided four proper toilets, each of which is estimated to empower up to 150 teenaged girls to stay on in education whereas in the past sanitary needs would have prompted such girls to drop out of education.

Another project is a solar power system which enabled families to work — and study — for much longer.

The benefits that the DMU Square Mile India project brings to Leicester include strengthening cultural and commercial links with an area with which Leicester has very strong links, as well as attracting more students from India to study in Leicester.

Before he gave his talk, Mr Charlton was told by Community Service lead Jim Matthews, who used to work at the Leicester Mercury with Mark, that eight members of DMU Square Mile Leicester project had stepped up to volunteer to help the Rotary Club’s Big Clean Up at the junction of Aylestone Road and Walnut Street, on Saturday, April 23 — St George’s Day. For details of that project, visit these pages after the 23rd.