Gemma’s best bit of the year

Gemma was speaking just before Geoff Blurton, incoming District Governor — lead Rotarian of the 87 clubs in the East Midlands — spoke at Loughborough University to introduce his team of officers to the District 1070 Assembly. 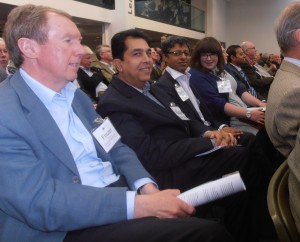 Gemma was there, supported by half of the 20-strong Rotary Club of Leicester Novus, which she will lead for the 12 months starting on July 1. They attended break-out sessions with members of other clubs to learn about opportunities to serve and to share best practice.

At the end of the morning assembly, Gemma’s enthusiasm was still shining as bright. And it was clear that Jason Chauhan and Deepak Karia, attending their first District Assembly, also enjoyed the unique atmosphere of sharing fellowship and ideas with several hundred other members of Rotary International, an organisation with 1.2 million members around the world.

Jason has been a member only since January 2014 and Deepak and his wife Sheema had joined Novus only two evenings before the assembly.

Gemma, who was a member when Novus was founded in 2009, is looking forward to leading the club assembly when members will plan how they will bring to life their slogan Service Above Self.