Every so often, the Rotary Club of Leicester Novus shares a Thursday evening meal to boost fellowship and, incidentally, funds for charities. 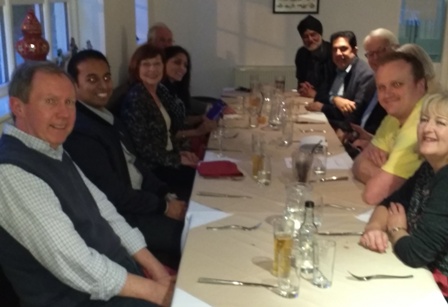 Curry Night at Aspects at the Plough

The April 2017 meal was taken at Aspects at The Plough, Enderby, when ten members were joined by President Elaine Vandelli and Michael Smith, of the Rotary Club of Kibworth and Fleckney. Their club was not meeting, so members were ‘scattering’ with four teams aiming to impress by travelling most often and furthest North West, North East, South West and South East.

All enjoyed the meal and hearing at the end of the evening that they had raised £102 which will be put into Novus’s charity pot for distribution later in the year.

For two Novus members, it was the second curry night in a week. Maya Vansia and Jim Matthews had joined the Rotary Club of Oadby’s evening at the Cuisine of India, Wigston, which raised £447 for the Rotary movement’s End Polio Now campaign. 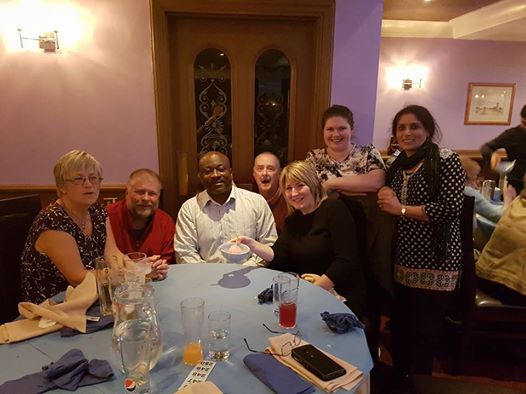 The Leicester Novus table at the Oadby Curry Night

The Rotary Club of Oadby raised £447 for the End Polio Now campaign by organising a meal at the Cuisine of India, Wigston. The Rotary Club of Leicester Novus took a table along with friends Mark Esho, Diana Esho, who are supporters of Unique Homes for Girls in The Punjab and other charities. Unique Homes are raising the orphanage’s profile by inviting people to have a cupcake with a candle.
Instead of a cupcake, the table used a delicious ice cream.
And then when Maya Vansia won chocolates in the raffle, they all shared them… along with some lovely inter-club fellowship.
Well done, Rotary Club of Oadby https://www.facebook.com/pages/Rotary-Club-of-Oadby/1514957738760058