Signed up for Abbey Park planting 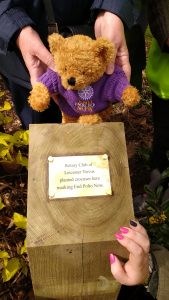 A plaque marking the planting of nearly 2,000 crocus bulbs has been installed in Abbey Park, Leicester.

The bulbs were planted by the Rotary Club of Leicester Novus as part of Rotary International’s 29-year effort to rid the world of polio.

Present to see the new plaque was Penny Brown, of the city council’s parks department, and her colleague Jane Ushwell. Jane had donated £200 towards the campaign in memory of her mother, who had polio, and who died earlier this year.  The Rotary Club say they will plant 78 more crocus bulbs – one for every year of Jane’s mum’s life.

President Gemma Kiddy thanked Jane for her support of the campaign: “Over the last 29 years Rotary and other global bodies have managed to reduced new cases of polio from 365,000 cases a year to only five new cases in the countries still regarded as having polio as an endemic threat; Afghanistan, Pakistan and Nigeria.

“But our fight must go on. Polio is only a plane flight away.”

Working with Penny Brown, the Rotary Club helped transform a litter-strewn and untidy corner at the junction of Aylestone Road and Walnut Street and members joined The Great British Spring Clean which carried out a litter-pick along New Walk.

It is currently helping to create a Peace Garden at Falcons Primary School in Gipsy Lane, Leicester, where more of the crocus bulbs will be planted.

Another way of raising funds for End Polio Now www.endpolionow.org is the sale of Purple 4 Polio jam and president Gemma took a couple of jars, along with an End Polio Now teddy bear to Abbey Park. 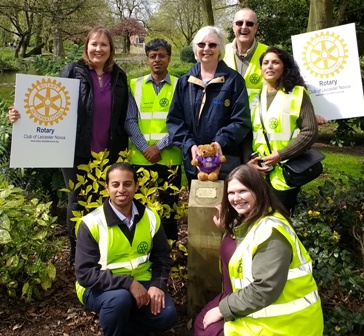