How a Jaffa cake led to love 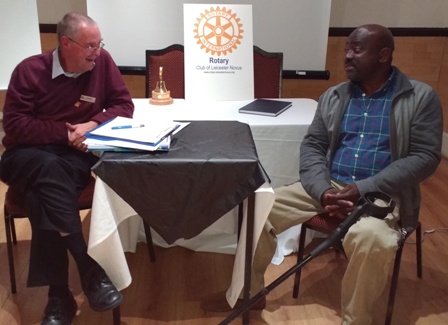 Jim Matthews questions new member Mark Esho about his past, present and future…

New member Mark Esho introduced himself to the Rotary Club of Leicester Novus and started by explaining that his Nigerian Christian name Abayomi (shortened to Yomi) is often translated as meaning bringing joy from God.

He was born in  Leicester 55 years ago and, due to a missed vaccination, became one of the last people — maybe even the last — in the county to contract polio. He spent three childhood years in hospital in Leicester and three teenaged years in Nigeria.

Apart from learning that Mark’s first pet was a white poodle (he now has a cocker-poodle and a Shih Tzu) and that his favourite food is Thai, members learned that his most recent holidays were in Dubai and Barcelona. His next holiday will be a return to The Gambia which he has visited twice before.

It was there that Diana, his wife of 31 years, was inspired to establish Your Smalls Appeal through which she elicits donated secondhand bras and desperately-needed sanitary wear and ships them to the West African country.

Mark and Diana have a 28-year-old son, Ren, who works in the family business, and a 15-year-old daughter Esmée who is still at school.

Setting up the ‘family business’ is what Mark describes as his biggest life achievement. His first job was as a book-keeper and he worked in accountancy before the effects of polio prompted him to set up a website. The first was a forerunner of Rightmove, but he was unable to make it pay. So he then created Easy Internet  which has two divisions, one dealing with web hosting and design and one offering search engine optimisation. The firm, based in Leicester and Bournemouth, has 14 employees and has worked for some very major companies. To offer round-the clock technical support, it also employs people in India.

Claiming to have a short attention span, Mark said that his favourite thing about his job is its flexibility and its fast pace and that it is truly a 24-hour operation.

Asked “Why Rotary”, Mark responded by saying that he had joined other groups before but found that “some people in them were out for themselves, and I wanted to be a part of giving something back to society.”

His hopes of things to achieve in the future demonstrate that attitude. He wants, eventually, to be able to step back from the business so he can give more time to the Department of Work and Pensions. Asked to explain, he said that for several years he has been giving talks for the Disability Confident Campaign which led him to meet David Cameron and others. The DWP regards Mark as being an inspirational role model, as do his new friends in Rotary.

But how did a Jaffa cake lead to love?

Mark and Diana met while students. In a cafe, Diana asked Mark if he would like a Jaffa cake. He politely declined because he doesn’t. But Diana wrote her number on a piece of paper and gave it to Mark. Days later, while he was doing the laundry, the piece of paper fell from his pocket to the floor and he picked it up. He rang the number. Within weeks they were a couple… Aaaah!