Ethiopia plan is a marathon, not a sprint 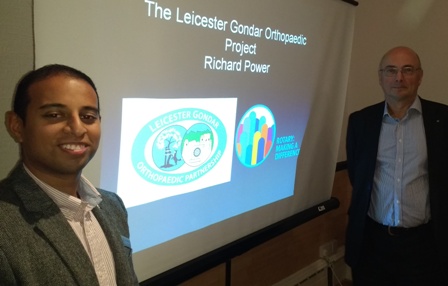 Richard Power, President of the Rotary Club of Leicester, explained to Novus members and guests the 10-year project his club is launching.

The Leicester Gondar Orthopaedic Partnership will be a marathon, rather than a sprint, as it aims to provide long-term support for an orthopaedic trauma service in Gondar, a city the same size as Leicester in the north of Ethiopia.

The University of Gondar Hospital and Medical School provides medical care for a population of seven million people in a remote rural area approximately. They are served by a single Orthopaedic Consultant and there is no dedicated Orthopaedic (bone) Trauma Theatre.

In March Mr Power, an orthopaedic surgeon, visited the area with colleagues and they agreed with the Rotary Club of Gondar Vasiliades to set themselves the target of raising £160,000. They are confident that with matching grants from the Rotary Foundation and others, they can achieve their aim of building a modern and properly-equipped orthopaedic operating theatre and to give teaching and guidance to orthodpaedic surgeons.

It may seem an ambitious target but it is not one that daunts Mr Power. He is to run in the Great Ethiopia Run on November 26, joining Africa’s elite distance runners (and 45,000 others) in
running 10k around the streets of Addis Ababa. Mr Power said he had been following a 12-week course from couch to 10k runner and has a couple more training runs before flying out to the Ethiopia capital.

Anyone wanting to sponsor Mr Power can do so by visiting this JustGiving page.

To get a thorough understanding of the project, view this video

He was thanked for his talk by President-Elect Jason Chauhan on behalf of the Rotarians present and their three guests..