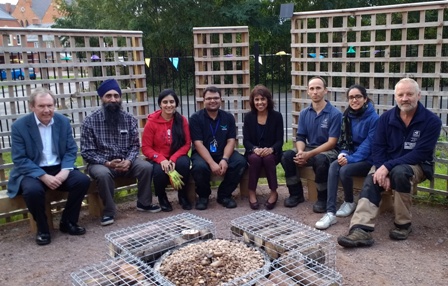 The peace garden being developed at Falcons Primary School by the Rotary Club of Leicester Novus is nearing completion.

Work after school on Wednesday, September 20, resulted in the installation of the water feature and  log-filled gabions, metal baskets filed with stones and logs. Weeding and seeding of the lawn within the dedicated area of the school ground will soon have the area looking well developed.

The school, on the site of the former Towers Hospital off Gipsy Lane, opened in October 2014 and it is hoped that the work of the volunteer landscape gardeners, Rotarians, staff, parents and pupils, aided by Matthew Herbert and his team from Leicestershire and Rutland Wildlife Trust, will be completed in time for its ‘unveiling at the school’s third birthday celebration.

Centrepiece of the Peace Garden will be a Peace Pole, rather like a totem pole, bearing messages of peace in several languages.It has been donated by the Rotary Club of Oadby Launde whose members have also helped on site.

The next gardening party hopes to be planting trees and a hedge on the site.

Anyone wishing to get involved in the project — or any of the other schemes driven by the Rotary motto Service Above Self — is asked to get in touch by contacting the school office or e-mailing RotaryClubofLeicesterNovus@gmail.com

We look forward to hearing from you.