Better than double top… double darts, two in one! 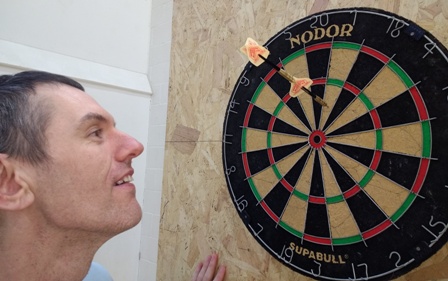 The second weekend in April was busy for Novus members.

On Friday Jasbir Mann, headteacher of the Sikh-ethos Falcons Primary School took time out to advise Warning Zone www.warningzone.org.uk on which Sikhs might wear the Kirpaan, the ceremonial knife all baptised Sikhs pledge to carry to defend themselves and their faith.

And then, on Sunday, Novus members made the trek to Stamford for the Disability Games run for the first time by District 1070 (the 90 or so clubs in the East Midlands of England).About 150 competitors took part in archery, rifle shooting, kurling, boccia, weightlifting, swimming, table tennis, a wheelchair dash and wheelchair slalom. And darts.

It was the darts competition that Gemma Kiddy, Frazer Robson, Jim Matthews and his wife, Sally, a member of the Inner Wheel Club of Oadby, took charge of.

There was only one ‘three-dart out’ (the goal of every professional darts player, but there were several bullseyes.

The most remarkable shot of the day, though, came from Lee Horsefield whose first dart scored one. His second dart followed the first exactly and lodged itself into the tail feathers of the first. The adjudicator thought it deserved more, but awarded two. Robin Hood would have approved!

A very closely contested men’s final resulted in Andrew Chomyn beating Eddie Scatchard, the only wheelchair user to compete, For him, the dartboard was lowered from 1.73metres to 1.37metres.

The women’s finalists, Nadeen Heywood and Deborah Cook, were so closely matched that it took a ‘nearest-the-bull’ throw-off. Nadeen won. 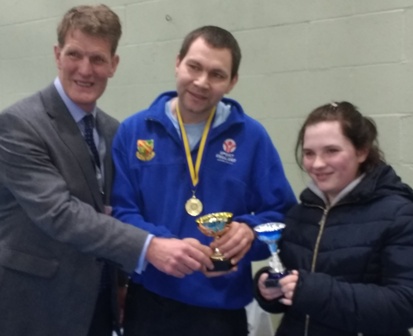 Glenys Robertson, one of the organisers of the whole event paid tribute to the work done by the Novus representatives. She said: “It was great to see the faces of all the competitors as they came out of the darts. They were all beaming with wide smiles. They had a great time. Thank you, Novus, for running the event. It went without a hitch. Brilliant!”

Afterwards Novus team leader Jim Matthews thanked Warning Zone for loaning mats to protect the sports hall floor from the many darts which bounced out of the dartboards, to Warning Zone volunteer Jean Hayes, whose husband David is a member of Shepshed Charnwood Rotary and who loaned Novus a dartboard, darts and the all-important scoreboards. He also thanked Jim Guthrie and Philip Heath who are members of the Rotary Club of Stamford. They arranged for a local woodworking company to make the stands for the dartboards, without which the darts event could not have been staged. “That was another wonderful example of how Rotary Clubs who collaborate can make great things happen.”