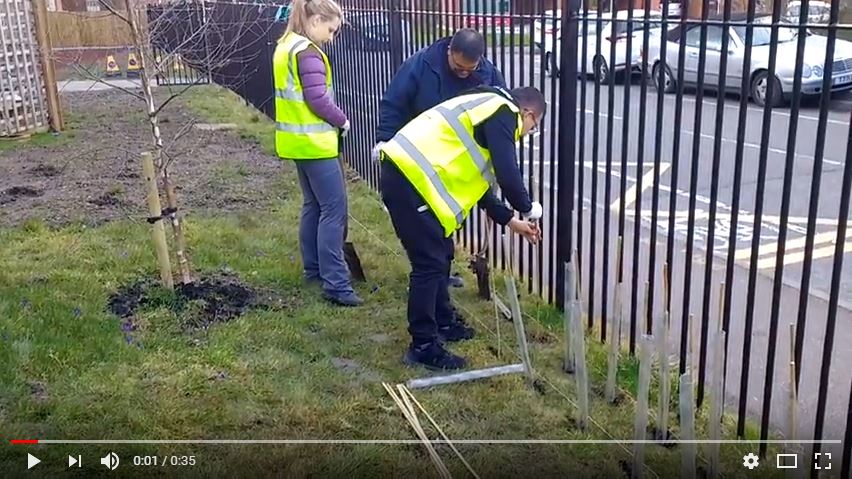 Despite forecasts of heavy rain, or even snow, volunteers turned up to help Leicester Novus Rotary Club complete the Peace Garden it is building at Falcons Primary School in the city.

Overseen by Frazer Robson, who has led the project from the start, and by Rotarian Jim Matthews, and school premises officer Viren Shah, together with Leicester University law lecturer and De Montfort University students Rubab Talpur and Yuhong Dong planted about 160 saplings of several species which will form a hedge around the site.

Jim, Novus’s Community Services lead, said: “We are so grateful to Ewa, Rubab and Dong for putting in such good work in very muddy conditions for a couple of hours during which we broke the back of the task we have set ourselves. We have even more volunteers coming tomorrow morning — let’s hope for similarly good weather.”

Saturday morning was bitterly cold with a strong wind blowing occasional flurries of snow. Nonetheless, the 15 volunteers completed the task in only just over an hour. 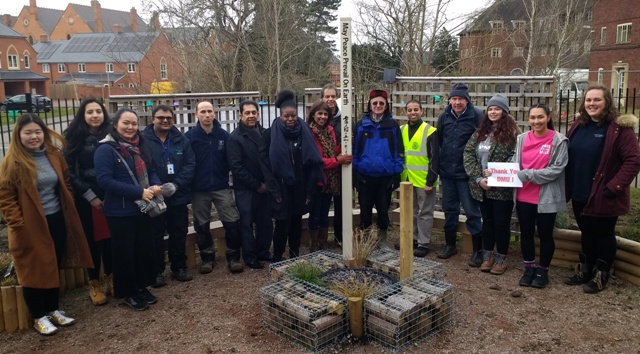 Headteacher Jasbir Mann put on the kettle for the volunteers — including seven more DMU students Kyna Broadhead, Kelcey Burton, Georgia Chenery,Sarah Knight, Qin Yanrong, Reychtal Ratcheva, Zhang Qiyue — plus Jasbir’s husband Ranjit, with Matthew Herbert, of the Leicestershire Wildlife Trust. Matthew has been the expert designer of the Peace Garden, but still rolls up his sleeves and gets his hands dirty, as does John Niblett, of the Rotary Club of Oadby Launde, which paid for the centrepiece of the Peace Garden.

That is the Peace Pole, so-called because it contains text in nine languages expressing one of Rotary’s central tenets: “May Peace Prevail On Earth.” The pole was erected ready for the opening of the Peace Garden in April.

By then, it is hoped, the grass and the 240 saplings will have grown. The sapling species include dog rose, hawthorn, hazel, crab apple, dogwood, rowan, blackthorn, silver birch, common ash, and wild cherry. The saplings were provided free by The Woodland Trust, under a scheme sponsored by Sainsbury’s, People’s Postcode Lottery and Yorkshire Tea.

Over tea and biscuits, club President Pradeep Popat presented certificates to Jasbir, Ranjit and Viren Shah, who had all completed an evening-long training course in Cardio Pulmonary Resuscitation and use of automatic external defibrillators held by the Rotary club at the school in January 2018.

After the volunteers had left, and small snowflakes began to fall, the deserted Peace Garden looked as it should when it fulfills its purpose — being a place of tranquility where pupils parents and staff can find peace and a place and time to relax and think. 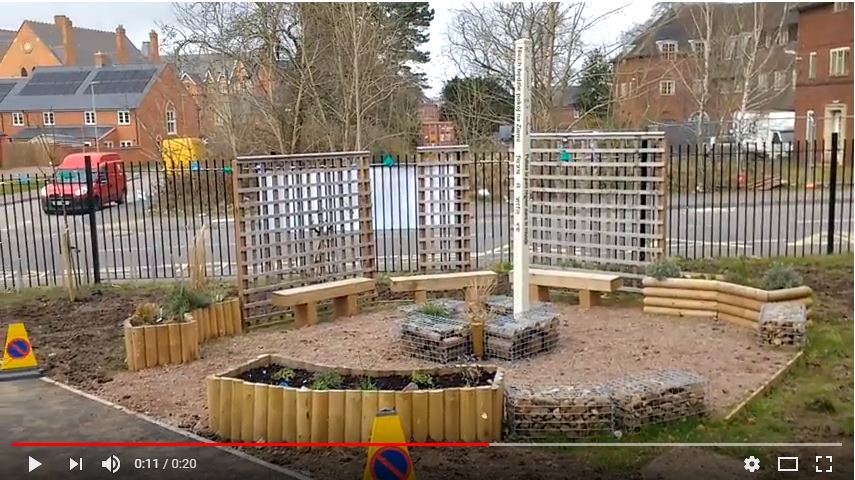 A central feature of the Peace Garden is the Peace Pole and the water feature surrounded by trellises and seats.