Learning how to save lives… 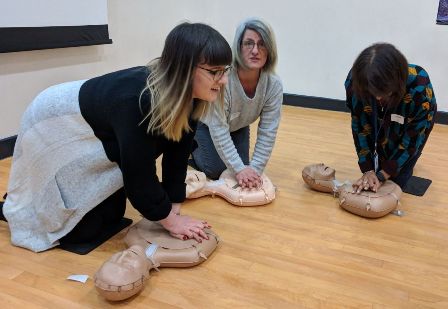 Twenty-one members and invited guests learned from volunteers with the charity Heartwize how to save lives. The meeting was staged in the spacious and airy hall of Falcons Primary School in Leicester whose headteacher, Jasbir Mann, is a member of the Rotary club.

President Pradeep Popat welcomed the guests, who included staff from Falcons, two teachers from secondary schools, two students from De Montfort University who cycled there from the city centre, and others, including, of course, Dr Doug Skehan, from Heartwize accompanied by trainers, including some from the Rotary Club of Melton Mowbray.

Dr Skehan gave an introduction incorporating a short video. He explained that time is of the essence when trying to save a life. If someone suffers a cardiac arrest and no-one steps forward to help, the victims chances of recovering drop to nil after only about 10 minutes.

Trainees and trainers enjoyed a delicious buffet provided free by President Pradeep, who is proprietor of the Mirch Masala restaurant before they got down — quite literally on hands and knees — to business.

Using mannequins, they learned about the key stages of DRS ABC

D – Danger; make sure that neither the patient nor helpers are in danger
R – Response; check to see if the victim is responsive to shaking and shouting
S – Shout; or call for help. Get someone to dial 999 or 112. The latter is good from mobile phones since the emergency services can use GPS to locate where you are calling from

A – Airway; is the patient’s airway clear?
B – Breathing; is the patient breathing? Check for obstructions in the mouth
C – CPR; start cardio-pulmonary resuscitation

That, trainees learned, involved in applying a series of 30 sudden downward pressures on the patient’s chest at a rate of about two a second. Then giving two rescue breaths. The trainees repeated and repeated the procedure and found that it is hard physical effort.

The next stage was to learn how to use a defibrillator. Dr Skehan had urged trainees not to be afraid of using them; the modern ones are so easy to use because they speak to life-savers, explaining step-by-step what they should do.

At the end of the evening all the trainees said they were glad they had gone and now felt much more confident about attempting CPR and using a defibrillator.

The Rotary Club of Leicester Novus staged the event in response to an appeal from Heartwize which wants to encourage Rotary clubs to learn how to use the techniques and equipment and then teach others. The charity also wants schools to teach Year 10 students.

“The more people who learn, and teach others, the better,” said Dr Skehan. “Don’t be afraid of defibrillators, the machines tell you what to do, he said.

Dr Skehan said: “The question is; will you overcome feeling uncomfortable about using the machine in an attempt to save a life? Could you ever overcome being uncomfortable if you just stood by and the person died?”

President Pradeep thanked Mrs Mann and the school for hosting the event, Dr Skehan and his team of volunteers, Immediate Past District Governor John Dehnel for bringing the charity to our attention and to everyone who attended. Each trainee will receive a certificate from Heartwize https://twitter.com/heartwize  .