Meeting Royalty one day, Rotary meeting the next! 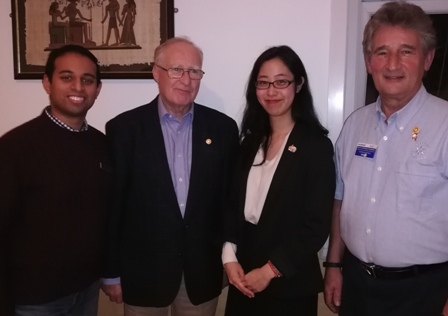 Irvin Metcalf, the lead figure in the East Midlands for the Rotary Foundation — Rotary’s own charity, and one of the biggest in the world — explained it all to Leicester Novus members and guests.

Among the guests was Mai Tsumura, a living example of one of the thousands of projects that the charity encourages and finances. Twenty-six-year-old Mai arrived from Japan in September to study at Leicester University. Some of the costs have been met by the Rotary Foundation, at the request of the Rotary Club of Nishinomiya-Ebisu. At Irvin’s request,  Mai talked about how she contacted Rotary in Japan after being offered the chance to come to the Victorian Studies Centre at Leicester University to research Victorian philanthropy.

Later, Mai revealed that the previous day she had stood in the wind and rain for a couple of hours hoping to catch a glimpse of the Duke and Duchess of Cambridge who were visiting the university during a day-long visit which included the King Power Stadium and Leicester Royal Infirmary.

Not only did Mai catch a glimpse of the couple, but she also got some photographs and even shook the hand of the Duchess. 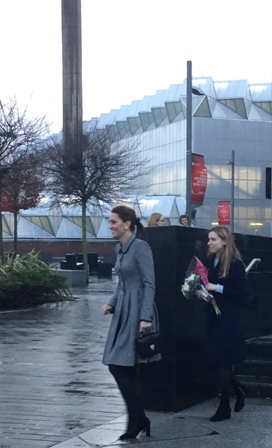 The Duchess of Cambridge at Leicester University photographed by Mai Tsumura

Understandably, Mai was quickly in touch with her mother Yuka in Japan!

Irvin’s excellent presentation on the Rotary Foundation included a link to this excellent film. It is well worth watching, whether you are a Rotary member or a member of the public.

Irvin urged Rotary members to take on board the Every Rotarian Every Year message and to annually contribute the equivalent of $100 dollars (the cost of a cup of coffee every week).

He said that at the heart of  Rotary and its Foundation is Peace. His club, Granthan Sunrise, had, that morning, erected a Peace pole in his town. Earlier this year, Leicester Novus had created a Peace Garden as a centrepiece to a Peace Garden at Falcons Primary School in Leicester.

That will be a lasting physical example of the work of the Rotary Foundation, and Mai’s year in Leicester will live long in the memories of Mai, and many other people, too.