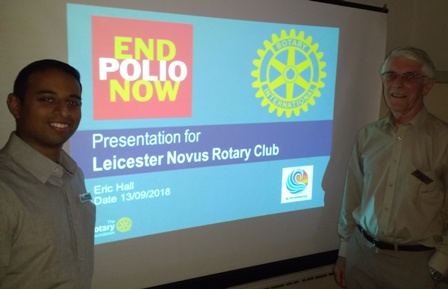 Rotarian Eric Hall, one of three End Polio Now champions in District 1070, visited the Rotary Club of Leicester Novus to give an update on Rotary International’s 30-year campaign to rid the wqorld of polio.

Eric is exceptionally well qualified, having gone four times to India to vaccinate children against the disease. Rotary first became involved in 1979 when it helped immunise three million children in the Philippines. In 1988. In 1985 it launched Polio Plus, the world’s first global health campaign funded largely by public donations. The ‘Plus’, said Eric,  is explained  by the vaccine also including antibodies against measles, tuberculosis, diphtheria, whooping cough and tetanus. At that stage there were 350,000 new cases of polio being diagnosed every year. So far this year there have been fewer than 100 cases worldwide. .

Eric said that the last cas in the UK was diagnosed in 1984. In the UK, we immunise children against polio when they are eight weeks old, 12 weeks, 16 weeks, three years and four months and then a booster when they are in secondary education.

“We cannot afford to stop this programme,” Eric said, urging Novus to increase it’s already-generous donations to End Polio Now. He urged members to seize World Polio Day on October 24 as an opportunity to raise money for this vital campaign.

On that date, Novus will be making an announcement about its future support for End Polio Now.

In Eric’s audience was Novus member Mark Esho, whose autobiography I Can. I Will. has topped the Amazon best-seller list. It tells how Mark contracted polio when he was almost five years old and living in Newbold Verdon and how he overcame racism, abuse and even polio to become an award-winning Leicester entrepreneur. Mark is launching his book in London next week and in Leicester on September 25.