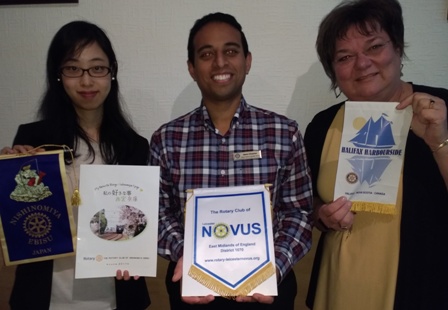 Two guests — one from the East and one from the West — gave members of Leicester Novus Rotary Club an insight into Rotary far from the UK.

Louisa Horne, who is a member of the Halifax Harbourside club, and who next summer will become the leading Rotarian for the 47 clubs, with 1,500 members, in the East  of Canada. Louisa joined the club 13 years ago when her daughter was selected to be a Rotary Youth Exchange student and travelled to Heidelberg, Germany. “She went, and I stayed — in the Rotary Club,” said Louisa.

As a business consultant, it is unsurprising that she was asked to help with marketing of Rotary and membership, which is declining just about everywhere except in Asia. When Louisa joined, the Harbourside club had 20-22 members. After a three-year period of intensive planning, her club now has 70 members “and another eight will be inducted tomorrow,” Louisa told Novus.

Harbourside banned the word ‘recruit’ and instead focuses on being ‘irresistible’. Louisa told Novus that past members, guests who came but did not continue coming and others were interviewed. The ‘moments of truth’ which revealed why some people found her club resistible helped the club undertake substantial changes. Attendance, she said, became less important and members were encouraged to help the club complete projects even if they cannot attend regular meetings.

Louisa said she had been with the President of Rotary International Barry Rassin 10 days earlier. “Nothing is ruled out,” she said. Her club now has several members aged in their 20s and 30s with only three retired members. Representing the diversity of its community was important to clubs. She reported that her club was the first in the world to take part in a Pride Parade and as a result attracted new members.

Asked by Novus member Deepak Karia for three top tips in increasing membership, Louisa said the format of meetings had been changed so that younger business people could recognise that meetings produced value in terms of time and money; that inappropriate language and humour was eradicated; and that service projects could be tackled on an ad hoc basis. ‘Passport members’ who might move from club to club to suit their needs and their talents might become more common. 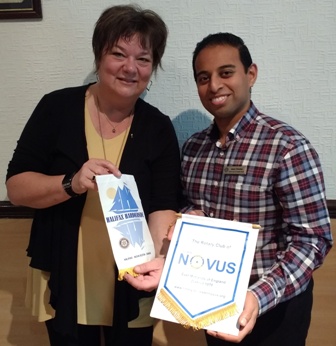 President Jason Chauhan, who himself is only 26, exchanged banners with Louisa before doing so with Mai Tsumura. This was Mai’s third visit to a Novus meeting, but the first at which she had the opportunity to hand over a banner from her sponsors, the Rotary Club of Nishinomiya-Ebisu.

Mai was born in Tokyo but educated in the city of Ashiya, which is famous for literature and is halfway between Osaka and Kobe. It was at Kobe College that she completed a Global Studies  Course in the English Department  with her thesis National Core Values and Past Events in the Case of Catalonia. She is now doing her master’s at Leicester University researching John Ruskin’s Idea of Helpfulness and Unity in Real Life in Modern Painters. John Ruskin (1819-1900) was the leading Victorian English art critic who wrote extensively on a wide variety of subjects. Mai’s dissertation will deal with Ruskin’s idea of individuality and unity based on relationships through charity in the 1860s. His writings greatly influenced Mahatma Gandhi who in 1925 listed the Seven Social Sins in the newspaper Young India:

Mai said it was Ruskin’s ideas which led her to ask the Rotary Club of Nishinomiya-Ebisu.

Ebisu is the Japanese God of Fortune. Several in Mai’s audience were Hindus who considered the similarities between Ebisu and the Hindu god Ganeshji.

Mai said she had attended a party in March 2018 to celebrate the 20th anniversary of the her sponsoring club, which has 24 members and which does a lot of work in environmental matters including planting hundreds of trees, repairing the damage caused by earthquakes and by fostering friendships between young people by promoting baseball and basketball competitions for schoolchildren. 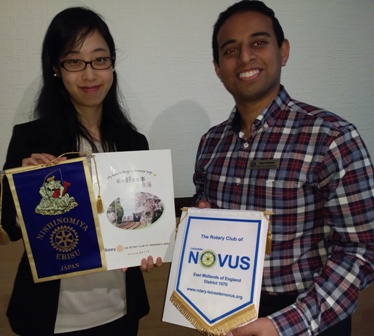 Novus members have agreed to help Mai settle and study in Leicester during the next 12 months.