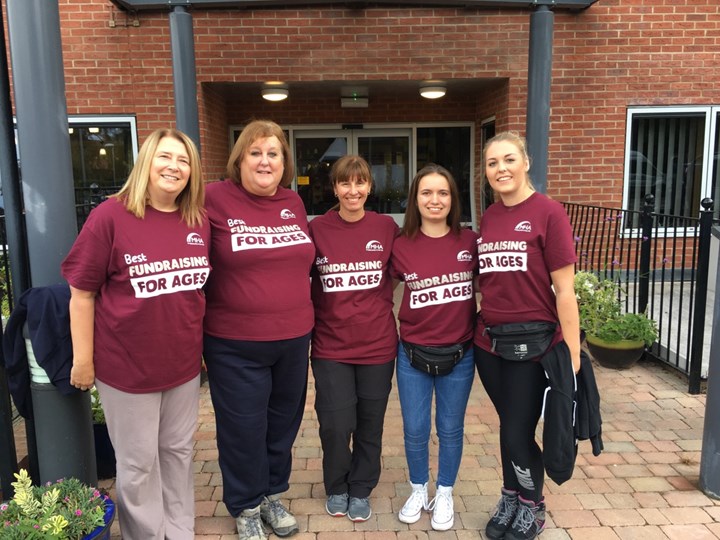 Karen Storey (second from left) with her intrepid team of Grand Canyon conquerors, including her daughter Sophie (right)

Karen Storey, due on July 1 to become president of the Rotary Club of Oadby, has just returned to Leicester Novus Rotary to report on her latest big adventure — undertaking The Grand Canyon trek.

She and her daughter Sophie spoke to Novus in August 2014 about their trek through the jungles of Thailand some months earlier. The Grand Canyon experience seemed an even higher achievement, especially as Karen does not like heights and suffered from a very severe stomach upset for two of the 11 days.

She and her team from Aigburth Methodist Homes for the Aged, where she works with people with dementia, were part of a bigger team of 19, plus three guides, including a qualified medic. In temperatures of up to 84F during the day and minus 2C at night, the group saw rattlesnakes and skunks — one of which slunk underneath the groundsheet of her tent during the night. Sophie and Karen eventually managed to evict their uninvited guest.

Their tents were just part of the 15kg rucksacks which Karen and Sophie had to lug 2,000ft up the canyon. Apart from the spectacular views around Cathedral Rock, one of the highlights was the Navajo Indian reserve and their works of art.

Karen and her team from MHA were fundraising to tackle dementia. Her commitment to the cause cannot be doubted. Apart from her paid work, she and other member of the Rotary Club of Oadby now run two dementia cafes in the town.