Exploring the links to city’s charities 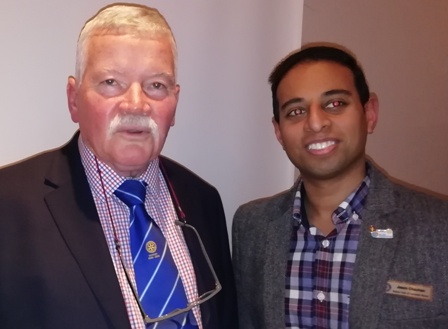 Rotarian Colin Derrick is President of the Rotary Club of Leicester 2018-19 and aims to raise £20,000 for Charity Link http://charity-link.org He was welcomed by Leicester Novus President Jason Chauhan when he gave a talk about his chosen charity.

It was a fact-filled fascinating presentation. Colin told his audience that Charity Link, formed in 1876, helps 5,000 people in need across Leicester, Leicestershire, Rutland and Northamptonshire every year.

Colin referred to a 2017 BBC survey that revealed that in the UK 10 million people had no cash savings, 16 million people had savings of less than £100 and 3.26 million had savings under £1,500. He asked his audience to imagine what would happen if they were in that position and that, driving home, their car broke and they had no money in their pocket or their bank account.

Colin is not just a good ambassador for Charity Link, but he is organising a number of events to raise money for it. Last autumn he scaled Beacon Hill, Bardon Hill and Old John in a 17-mile, seven-hour sponsored trek. He has organised a concert, a duck race and, on March 1, a fund-raising performance of Goodnight, Mister Tom at the Little Theatre.

His talk led to a fascinating 40-minute discussion of the causes of crisis and hardship and the links between charities and governmental organisations.

The discussion was followed with interest by Mai Tsumura a Rotary-sponsored academic from Japan who is spending a year at Leicester University studying philanthropy in Britain.